The best way for foreign investors to grab a piece of New Jersey’s up-and-coming online gambling market is by owning an Atlantic City casino. 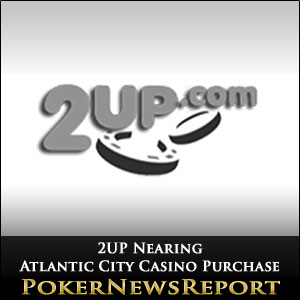 The best way for foreign investors to grab a piece of New Jersey’s up-and-coming online gambling market is by owning an Atlantic City casino.

London-based 2UP Gaming is well aware of that and has announced that a deal to acquire a New Jersey casino is nearly finalized. In collaboration with U.S. investment firm MidOil USA and Asian investors, 2UP has a $330 million bankroll and is prepared to toss some of that cash into the pot in its quest to get a toehold in the U.S. market.

The new buyers have not revealed the name of the casino they plan to purchase and refurbish, saying only that it is located on Atlantic City’s boardwalk. Of the dozen casinos in New Jersey, nine are fixed on the boardwalk, while the remaining three can be found in the Marina District.

Both the Atlantic Club and the Trump Plaza Hotel and Casino reached deals to turn over the keys to new owners earlier this year. Both agreements eventually fell through, with PokerStars and the Meruelo Group left to lick their wounds over the failed changes of ownership.

It was reported in July that 2UP was planning to either: a) purchase a New Jersey casino or, b) build one if a deal for an existing casino could not be reached. Plan “B” has now been removed from consideration with a deal to takeover a standing brick and mortar imminent, MidOil managing director Vince Crandon told the Press of Atlantic City.

The Asian investors are reportedly readying themselves for an overseas flight to New Jersey in order to consummate the acquisition agreement. The purchase price has apparently been agreed upon, leaving only the crossing of t’s and dotting of i’s in order for the placement of a new name above the door of the unnamed casino.

2UP is a leading European online gaming company. It has been confirmed that 2UP is one of 37 applicants who timely filed an application with state regulators in order to participate in New Jersey’s online gambling regime. State Division of Gaming Enforcement officials have targeted November 26 as the launch date.

If the proposed deal to acquire the unknown casino is completed shortly, it appears that 2UP may be prepared to open its virtual doors with the first batch on online gaming operators in late November. PokerNewsReport will divulge the name of the casino that 2UP intends to acquire once that information is revealed.