The schedule for Full Tilt Poker’s 23rd Full Tilt Online Poker Series (FTOPS) has been released, and there will be events to cater for almost all budgets. 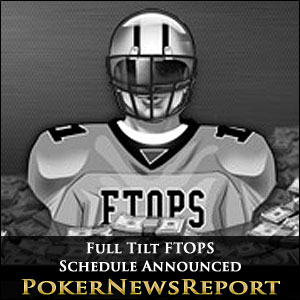 The schedule for Full Tilt Poker’s 23rd Full Tilt Online Poker Series (FTOPS) has been released, and there will be events to cater for almost all budgets.

The FTOPS is set to get underway on August, with the first event being a $200 + $15 No Limit Re-entry tournament that will have a $500,000 guarantee. That will be the first of 39 tournaments to be held during the two-week long event.

A total of $8 million in prize money will be guaranteed over the two weeks, $1.5 million of which will be for the FTOPS Main Event. The $600 + $35 No-Limit Hold’em Re-entry Main Event will be held on August 18.

The event with the largest buy in is Event #35, which is a $2,000 + $100 No Limit Ante from start Re-entry event. That tournament will feature a $1 million guarantee and will be a two day event.

All players who end up making a final table in any of the tournaments in the upcoming series will receive a limited edition FTOPS jacket. Players who take top spot in an event will receive a jacket, a gold FTOPS jersey, and a gold jersey avatar for use on Full Tilt Poker.

The player who ends up finishing first on the FTOPS XXIII Leaderboard will win a custom Full Tilt Poker avatar. The first place getter will also win a prize package that includes entry to all but one FTOPS XXIV event, which has a combined value of about $11,000 in tournament entries.

There will also be a small incentive for the last player eliminated before the money of any of the August FTOPS events. All of those players will have an chance to win an entry to the August 24 “Bouncebackability” Freeroll tournament, where the first place getter will be registered in the FTOPS XXIV Main Event.

The cheapest buy in for a FTOPS event is $100 + 9, which is the buy in for seven of the 39 events that will be on offer in August.