The popular poker forum web site – twoplustwo.com – was hacked into last night (Thursday 26th), with the hacker gaining access to members´ email addresses, usernames and encrypted passwords. It was feared that the hacker had the ability to decrypt the passwords and the site was closed as a precaution. 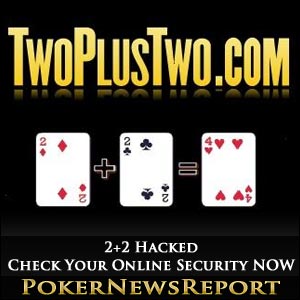 It was feared that the hacker had the ability to decrypt the passwords and the site was closed as a precaution.

Emails sent out to all registered users advising them of the outrage and the following message was placed on the site to explain the temporary closure.

On April 26th at approximately 11:20 AM pacific time, the Two Plus Two Forums were closed as a result of a hacker who has displayed the ability to access e-mail addresses and encrypted passwords.  He also indicated the ability to decrypt passwords.

While it is unclear the extent of data to which he gained access, e-mail addresses and passwords on the Two Plus Two forums should be considered compromised.  If you have used your 2+2 password on any other site, you are advised to change it.

For your security we are closing the forums until the breach is patched.

We hope to be back up as soon as possible.

Noah Stephens-Davidowitz – a poker security consultant, one of the leading moderators on the twoplustwo site and previously editor-in-chief of “Subject:Poker” – immediately expanded the news about the outrage on his own blog, providing the following information:-

First, if you use the same password on 2p2 and some other site(s), change the password on the OTHER site(s) IMMEDIATELY. If you don’t know what your 2p2 password is, go to 2p2 (whose forums are down but whose servers are still up), log out, and then try logging in again to check your password. If you have the same password across a large number of accounts, use the following priority when changing passwords: 1) e-mail address(es), 2) bank account(s), 3) poker sites, 4) sites that have your credit card number stored (e.g., Amazon), and 5) everything else.

More about the technical aspect of the outrage can be found on www.nsdpoker.com/2012/04/two-plus-two-hacked and for the latest developments on when the twoplustwo forums may re-open, follow Noah Stephens-Davidowitz on Twitter @NoahSD