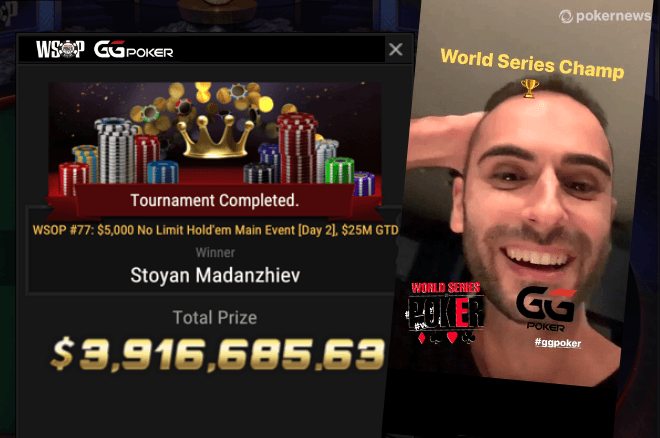 The 2020 GGPoker World Series of Poker Online Main Event wrapped up, and Stoyan Madanzhiev is the player who topped the field and won $3,904,685. Before winning this event, the Bulgarian player had only $5,500 in WSOP-related earnings. However, his world completely changed after making a fantastic run in the online version of the WSOP Main Event, knocking out some much more successful players than him along the way.

One of the most crucial hands he played was when 25 players left in the game when he won against Martin Arce with a pair of kings against ace-king. He earned a 22-million pot, to amass a total of 40 million at that moment, with a blind level being at 300,000.

But the Bulgarian player continued to dominate, facing Julian Stuer after that. After a couple of successful hands, he had a chip advantage. He started making pressure on other players, with some of them being rather popular in the poker world, including Bryan Piccioli and Samuel Vousden.

In fact, the hand against Vousden was also rather important for Stoyan Madanzhiev, when he managed to hit a three on the turn while holding ace-three in his hand against ace-nine that Vousden had in his pocket.

The final table consisted of both popular players and some of their less popular colleagues, including Stoyan Madanzhiev. For example, some of the well-known professionals who made it to the very end are Stefan Schillhabel, Thomas Ward, Tyler Cornell, and Samuel Taylor. However, all of these players had less than 20 BBs at the start of the final table, and they did not take long to hit the rail.

The first one to go bust was Samuel Taylor from the US, who managed to earn a total of $230,395 as of the ninth-placed player. He is followed by his fellow countryman Tyler Cornell in the eight positions for $328,305.

The next one in line was Germany’s Stefan Schillhabel in the seventh place and the total prize of $467,825. Joao Santos from Brazil had to hit the rail after that, winning a total of $666,637.

A Japanese player Stoshi Isomae won $949,937 as of the fifth-placed player, and he was followed by New Zealand’s Thomas Ward, who managed to win $1,353,634, the first of four seven-figure prizes for the top four players in this tournament.

The last player to hit the rail before the heads-up play could start was Tyler Rueger from the US, who won a total of $1,928,887.

Madanzhiev’s final opponent was a player from china called Wenling Gao. She had plenty of chips entering the heads-up, meaning we were up for a deep-stacked play in the final part of the Main Event. However, it seems that Madanzhievs was always a step ahead of his opponent and managed to achieve the victory step-by-step.

Wenling Gao became the leader on the female all-time money list on the WSOP, winning a total of $2,748,605 as the second-placed player in the 2020 GGPoker WSOP Online Main Event.

Madanzhiev managed to achieve the most important victory of his career. The only thing that could top this is the land-based counterpart of the Main Event, but that’s not likely to happen. Apart from being statistically impossible, it’s also not Madanzhiev’s favorite way to play poker, as all his winnings are achieved on the web. Before winning this event, he had approximately $30,000 in live earnings, most of that coming from European poker tournaments.