The World Series of Poker has announced that the first open event of next year´s poker jamboree will be Colossus II – this time with a $1 million first prize. 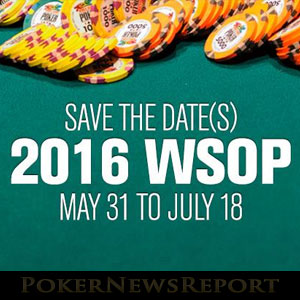 The World Series of Poker has announced that the first open event of next year´s poker jamboree will be Colossus II – this time with a $1 million first prize.

Depending on what side of the fence you were on, last year´s WSOP Colossus was either a remarkable success or a bit of a disappointment. The 22,374 players that entered and re-entered the $565.00 buy-in event created a new record for a live poker tournament and generated a prize pool of $11,187,000.

However, the organizers were heavily criticized for the prize distribution that saw min-cashing players collect almost double the buy-in for finishing in the top 10 percent of the field, while the winner – Cord Garcia from Houston in Texas – “only” received $638,880. There were also complaints about the chaos that followed Day 2 knockouts when the cash desks could not handle the volume of players wanting to collect their winnings.

Organizers seem to have listened to the criticisms and made some significant changes to next year´s Colossus II. Instead of two opening flights as there were this year, the Colossus II will be the first open event of 2016 WSOP and will have three opening flights on June 2, 3, and 4.

The payout structure will be changed so that every player who survives any of the three Day 1s will automatically be in the money; and, although the increase of the prize pool guarantee from $5 million to $7 million is hardly going to be notice, the guarantee of a $1 million first prize so early in the series is likely to attract plenty of players to the event.

Organizers have revealed that next year´s 2016 WSOP will run from May 31 through July 18. As customary, the schedule will start with the Casino Employees Event and conclude when the final table of the WSOP Main Event has been reached. The three opening flights for the $10,000 buy-in Main Event are scheduled for July 9, 10 and 11.

Although the full 2016 WSOP schedule will not be released until January or February, the date of the Seniors Event has been released (June 17) and also news that the series will include the Monster Stack, Millionaire Maker and Little One for One Drop events. There is no word yet on another Big One for One Drop.

Other Events and Online Events still in the Planning Stages

According to WSOP Executive Director Ty Stewart, the finalized schedule for the 47th Annual World Series of Poker will include more than sixty bracelet events (there were sixty-eight bracelet events in 2015). He announced in a press release that the weekends during the series will be tailored to cater for “No-Limit Hold´em Weekend Warriors”, while a range of entry level and Championship level events will be hosted between.

There is no word yet on whether there will be an online bracelet at the 2016 WSOP. Last year´s inaugural online event only attracted 905 players and was considered a disappointment in comparison to the million dollar tournaments hosted by offshore poker sites.