WSOP organizers have made a change to the original structure of the first-ever online poker bracelet event set for July 2. 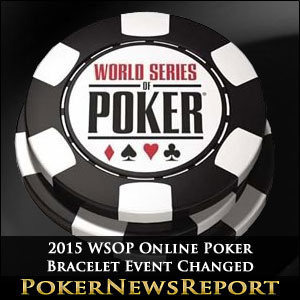 WSOP organizers have made a change to the original structure of the first-ever online poker bracelet event set for July 2.

Event #64, a $1,000 buy-in NLHE tournament hosted by WSOP.com in Nevada, was previously slated to play down to the final two players. A heads-up match for the title and bracelet was to commence on the following day, July 3, at the Rio All Suites Hotel and Casino.

After listening to players and critics (often one and the same), WSOP officials have decided that the tournament will play down to the final six players. The remaining half-dozen will transition from the virtual to the live felt two days later, on July 4, allowing an extra day of travel time in case one or more of the players are located elsewhere in Nevada other than Las Vegas.

The modification will make Day 2 of the competition more exciting for railbirds and fans, as four more players than originally announced will be required to make the switch in strategy needed to excel at live poker instead of online.

The idea of an online bracelet event continues to bring out those in favor, as well as those opposed. There are arguments to be made for both sides of the debate and it’s difficult to make a determination about who may be right or wrong.

Online poker has had a tremendous impact on live events in the last decade or so. Players now have the ability to hone their skills much more rapidly by playing many more hands multi-tabling online than would not even have been imaginable back in the 1990s. Online poker has funneled many a pro into the live tournament realm, so why not offer a bracelet that reflects that?

Also, more and more online players are winning seats to live WSOP events through satellites and qualifiers offered by various poker sites. An argument could be made that a good percentage of live players at WSOP events began their journey online, making an online bracelet event a natural progression.

Detractors insist that awarding an online bracelet is bad for the game. The skills involved in live and online play are substantially different, they say, when considering tells, emotions and the whole experience of competing live versus on the Internet. Not to mention the advantages of poker tracking software that many online players lean on for support.

In any event, whether you are for or against it, the WSOP online bracelet event is set to go down in less than four months. Only those players in Nevada can take part.

Someday, we can expect online bracelet events that include players from states other than just Nevada. In fact, New Jersey players wish that they could compete in the first-ever Internet bracelet event this year.

But with interstate poker yet to get off the ground, and despite the fact that WSOP.com also operates a site in New Jersey, online bracelet events played in more than one state will have to wait for a future date.