The three penultimate tournaments of the 2014 World Series of Poker concluded at the weekend and a Swede took the lead in the early stages of the Main Event. 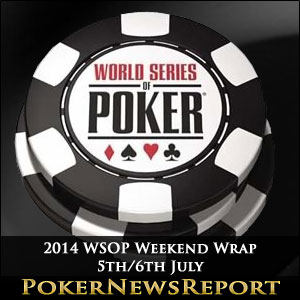 The three penultimate tournaments of the 2014 World Series of Poker concluded at the weekend and a Swede took the lead in the early stages of the Main Event.

Igor Dubinskyy, Bryn Kenney and Pat Walsh enjoyed the perfect preparation for the 2014 WSOP Main Event with victory in the last three tournaments prior to this year´s feature – each topping significant fields to collect the lion´s share of the $8.5 million distributed in prize money over the weekend.

Igor Dubinskyy´s victory in the “Little One for One Drop” was possibly the most significant win of the weekend; as the Ukrainian had to overcome a field of 4,496 in the $1,111 charity event to collect the $637,539 first prize, but Bryn Kenney´s domination of the 10-Game Mix tournament and Pat Walsh´s heads-up tussle with Javed Abrahams in the Pot Limit Omaha event were equally as engrossing.

The entry for this year´s “Little One” did not quite match that of last year, when Brian Yoon outlasted a field of 4,756 players to win his first WSOP bracelet, but it managed to raise an incredible $499,056 for the One Drop charity. The financial generosity of the players was mirrored by the action on the tables, and the bubble burst two levels into Day 2 when Franck Yenigotchian (A♣ 10♣) failed to find the cards he needed after a two-club flop to best Julian Parmann´s 10♦ 10♥.

After a short Day 3, nine players returned to the Rio All-Suites and Hotel to contest the final table of Event #62 – headed by Jackduyph Duong. Duong was to be eliminated in sixth place by Igor Dubinskyy (4♦ 4♥ > A♠ J♣) in a hand which catapulted the Ukrainian into the chip lead, and from there Dubinskyy never looked back – taking a 2:1 chip advantage into the heads-up against Theodore Driscoll, and rivering a straight with 5♥ 6♥ to win the tournament and $637,539 prize money.

The 10-Game Mix Event #63 of the 2014 WSOP saw mixed-game specialists rise to the top of the chip counts throughout the three days of action. Coming into the final day, New Zealand´s most successful mixed-game player – Jan Suchanek – held a big chip advantage; but Bryn Kenney found a Jack Badugi against Daniel Zach during five-handed play to take the lead in the tournament – a lead he never relinquished.

Kenney took a chip advantage of almost three-to-one into the heads-up against Suchanek after eliminating Fabio Coppola in third place during a round of 2-7 Lowball Triple Draw, and he won the tournament during a round of NL Hold´em with rivered trip Nines against Suchanek´s two pairs – remarkably (seeing he rates as #15 in the Global Poker Index) Kenney´s first WSOP bracelet.

Day 3 of the $10,000 buy-in Pot Limit Omaha Event saw 23 players return to the felt including such names as Sam Trickett, JC Tran and Matt Stout. Pat Walsh took a massive chip lead to the final table after busting out both Tom Marchese and Alex Kravcenko with a flopped set of Queens, and he had almost half the chips in play when the game was four-handed.

With two of the three opening flights of the 2014 WSOP Main Event already in the books, a total of 2,915 players have so far ponied up the $10,000 buy-in or qualified through the numerous options to take their seat in the feature tournament of the series. Around 1,300 players have survived into Day 2 – led by Sweden´s Martin Jacobson (200,100), who was the only player over the first two opening flights to amass more than 200,000 chips.

Other notable players to carry forward significant stacks of chips include Erik Seidel (134,025 chips) and Marvin Rettenmeier (115,000 chips), while last year´s Main Event winner Ryan Reiss has a healthy stack of 70,225 chips, and the man who started the poker revolution – Chris Moneymaker – has 69,850 chips to work his magic with on Tuesday´s Day 2A/B.