The final nine players for the 2014 WSOP Main Event has been determined after an intriguing Day 7 which saw European players take control of the tournament. 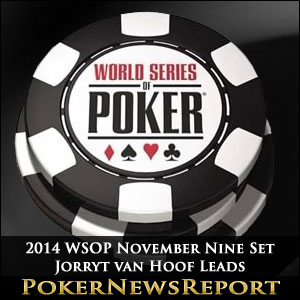 The final nine players for the 2014 WSOP Main Event has been determined after an intriguing Day 7 which saw European players take control of the tournament.

Twenty-seven players returned to the Amazon Room in the Rio All-Suites Hotel and Casino last night, each with the dream of being one of the final nine players that would contest the climax of the WSOP 2014 Main Event that will be concluded over November 10th and 11th.

Within five levels of action, the November Nine was set; with European poker players filling the top two places on the leaderboard, and with Mark Newhouse having achieved back-to-back WSOP Main Event final tables – the first time this has been achieved since Dan Harrington accomplished the feat in 2003/4.

Indeed it was Newhouse who got off to the best possible start by eliminating Sean Dempsey in twenty-seventh place in the fifth hand of the day with a rivered flush, and thereafter players exited the tournament on a regular basis – Brian Roberts´ K♦ J♥ failing to improve past Eddie Sabat´s A♦ Q♣ , Maximilian Senft (A♦ J♦) flopping a pair of Aces to send Bryan Devonshire (10♦ 10♣) to the rail and Bruno Politano finding K♠ K♦ to bust the K♥ Q♥ of Kyle Keranen.

Sindelar Suffers as van Hoof and Politano Lead the Field

At the start of Level 32 (blinds 100K/200K – ante 30K) the players converged around two tables after Christopher Greaves eliminated Scott Palmer A♥ A♠ > 2♦ 2♣ to reduce the field to the final eighteen. Sindelar was not as well suited by the slow pace of his new table and shipped chips to William Tonking before doubling up Andrey Zaichenko A♦ J♠ > 8♣ 8♥.

Despite his double-up Zaichenko was soon eliminated by Jorryt van Hoof in the cruellest of fashion, after van Hoof tabled 10♣ 6♣ for a flopped flush to crack Zaichenko´s pocket Aces. With the hand, Jorryt van Hoof had taken the chip lead at Sindelar´s table, but the overall chip leader at the end of the level was Bruno Politano – who had forced Felix Stephensen out of a 7.5 million chip pot to increase his stack to 22.5 million chips.

Returning from the dinner break, the pace of eliminations accelerated. Eddie Sabat was bust in sixteenth place when his Jack-high flush was trumped by Jorryt van Hoof´s Ace-high flush – placing van Hoof into a clear chip lead – and Felix Stephensen recovered from his loss against Bruno Politano when eliminating Thomas Sarra in fifteenth place A♠ K♠ > K♦ Q♥.

Newhouse chipped up to a healthy 21 million chips when flopping a set of Deuces to take a 14 million chip pot from Bruno Politano, and the “unofficial” ten handed final was set when Alex Greaves lost the last of his chips to Martin Jacobsen A♣ 3♣ > K♥ 5♠ and Maximilian Senft (K♦ Q♦) failed to connect with the board to improve past Mark Newhouse´s pocket Threes.

The unofficial final table may have only lasted 24 hands, but it was packed with drama. In the sixth hand, the shortest-stacked player, William Tonking, doubled up against Martin Jacobson J♥ 9♣ > A♣ J♣ – after hitting a Jack-high straight on a flop of 7♣ 8♥ 10♣ which had given Jacobson four clubs to a flush – and, on the next circuit of the button Andoni Larrabe doubled-up against Luis Velador A♠ A♣ > A♦ K♠, reducing Velador – the only previous WSOP bracelet winner in the field – to the position of short stack.

Velador lost more chips to a post-flop shove by William Tonking and was now becoming detached from the rest of the field with just sixteen big blinds. Eventually the pressure told, and Luis Velador shoved over a pre-flop raise by Bruno Politano and call from Mark Newhouse. Politano got out of the way, but Mark Newhouse made the call and the cards were on their backs:

The flop of 6♣ A♥ A♦ opened the possibility of a chopped pot, but the board completed 3♥ and A♠ to eliminate Luis Velador in tenth place and set the November Nine.

The November Nine consists of four Europeans, four Americans and one Brazilian – with the European players definitely having the upper hand. In addition to chip leader Jorryt van Hoof (The Netherlands) and second placed Felix Stephensen (Norway – now living in London), Europe is represented by Spaniard Andoni Larrabe and Sweden´s Martin Jacobson.

Mark Newhouse´s late, great run places him third in the chip counts – but he and his compatriots will have a mountain to climb if they are prevent a European taking down the 2014 WSOP Main Event on November 11th.