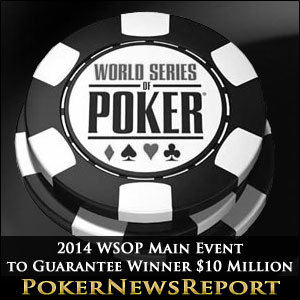 As is usual, the schedule for the 2014 World Series of Poker was announced on a “quiet” poker day to ensure maximum impact; but there were few surprises hidden among the sixty-five bracelet events that will be hosted at the Rio All-Suite Hotel & Casino from Tuesday May 27.

The widely-circulated rumour that the winner of the next WSOP Main Event would be guaranteed a first prize of $10 million was confirmed along with the return of the $1 million buy-in “Big One for One Drop” and the more accessible $1,111 buy-in “Little One for One Drop”.

The popular “Millionaire Maker” will be the highlight of the opening weekend of the 45th Annual World Series of Poker, with the $10,000 buy-in Ladies Tournament again offering a 90% discount to the fairer sex, and 2014 WSOP Main Event getting underway on Saturday July 5.

The $50,000 buy-in “Poker Players Championship” and ten other $10,000 buy-in “Championship” events form the backbone of the 2014 World Series of Poker, with dozens of supporting tournaments at a variety of buy-ins. The full 2014 WSOP schedule can be found at WSOP.com, but these are what we consider to be the unmissable events:

In 2013, a total of 79,471 players compete in sixty-two WSOP bracelet events and generated more than $197 million in prize funds. This year, Tournament Director Ty Stewart is expecting bigger numbers, especially with the return of the “Big One for One Drop” event and because players in New Jersey and Nevada can now qualify online at WSOP.com. Stewart said:

For ten years we have tried to raise the bar on tournament poker. There is real optimism 2014 can be our biggest year yet with an anticipated $200 million in prize money to be paid out this summer. With new satellites and daily tournaments exclusively on WSOP.com and a plethora of side events, there is more reason than ever to make the trip to poker mecca.

Of course, Stewart is also lucky that this year there is no scheduling conflict between the WSOP and the International Stadiums Poker Tour.