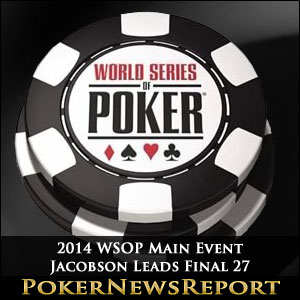 Day 6 of the 2014 WSOP Main Event began with 79 players aiming to survive the ever-increasing blinds, and make it through to tonight´s “final day” – the day on which the November Nine will be determined.

Leading the way at the start of play was Mark Newhouse – aiming to be the first player to make back-to-back Main Event final tables since Dan Harrington in 2003/4 – and although Newhouse stills survives in the 2014 WSOP Main Event, his chip stack at the close of play (6,820,000 chips) is slightly less than what he started with on Day 6.

Leaders Change throughout the Day

Only 4½ levels were played on Day 6 – the clock stopping when the field was reduced to 27 players with 44 minutes of Level 30 still to go – and during that time, the chip lead changed numerous times. Bruno Politano leap-frogged Newhouse in one of the early hands of the day – eliminating Jason Leifer with a set of Eights over Leifer´s flopped set on Threes – but Politano´s position at the top of the chip counts was usurped a few hands later when Kyle Keranen rivered a Full House to crack Jorryt Van Hoof´s pocket Kings.

Going into the second level of the day Kyle Keranen became the first player to exceed 10 million chips when eliminating Gabe Paul J♣ J♠ > A♥ 10♥, but after doubling up Chris Johnson A♥ K♦ > J♠ 9♠ and shipping a stack of chips to Matt Waxman, Keranen slipped back into the pack, and finished the day with 4.4 million chips. Kerenen´s place at the top of the leaderboard was temporarily filled by Dan Sindelar, who took a 2.5 million chip pot from Isaac Baron A♣ A♠ > A♦ 10♠ before eliminating Nathan Goldstein 7♣ 7♦ > Q♥ 8♥, and although Dan Sindelar finished the day with 16.3 million chips, two other players were to finish ahead of him.

Velador then Jacobson Rise to the Top

However, the chip leader going into the “final day” of action will be Martin Jacobson. Jacobson had sat behind the chip leaders for most of the day and had entered the final level with 12 million chips after taking a massive three-way pot against Peter Placey and Luis Assuncao with a flopped pair of Kings. During the last 75 minutes of play Jacobson eliminated Placey in a 10 million chip pot with A♣ K♥ > A♥ Q♥, took another million chips from Robert Campbell K♣ 6♣ > K♠ J♠, and bust Luis Assuncao A♥ J♥ > 2♦ 2♠ to chip up to 22,335,000 chips when a halt was called to the action.

Looking Ahead to Day 7 of the 2014 WSOP Main Event

Day 7 of the 2014 WSOP Main Event is the final day of the summer Series, and the day on which the “November Nine” will be determined. The twenty-seven players which have reached this stage have done remarkably well, and each is assured of a $286,900 payday for reaching this stage. However, each will be aiming for a seat at November´s final table, where the minimum payout is $730,725.

Sadly none of the final three tables will be graced with the presence of a female poker player. Mario Ho was the last lady standing on Day 6; but she was eliminated by Zachary Hirst in 77th place – just a few spots before Hirst was himself eliminated with A♠ 10♣ on a Ten-high board against Leif Force´s A♣ A♦. That´s Karma for you!

Those going into the last day of the Series with reason to have more confidence than most include: