Eric Tracey is the tournament leader after three opening flights of the 2014 WSOP Main Event, having leapt to the top of the chip counts at the end of Day 1C. 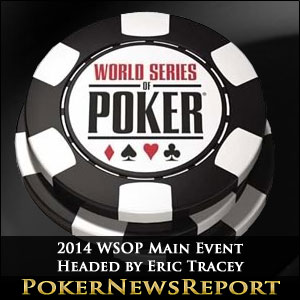 Eric Tracey is the tournament leader after three opening flights of the 2014 WSOP Main Event, having leapt to the top of the chip counts at the end of Day 1C.

With 3,768 players joining the action on Day 1C of the 2014 WSOP Main Event, it was always likely that the overall chip leader would emerge from the third flight of the tournament; but, for much of the five levels of play, most players seemed content to survive into Day 2 rather than risk an untimely exit.

2001 WSOP Main Event winner Carlos Mortensen was a prime example of the caution that players were showing in the early stages of the tournament – laying down trip Aces when faced with a bet of 3,000 chips and 4,000 more already in the pot – and Phil Ivey was equally subdued after flopping a straight in a three-way pot which included Mickey Petersen.

Ivey finished the day strongly courtesy of a flopped set of Aces to take second place in the Day 1C chip counts, but his stack of 187,025 chips is only good enough for sixth place overall, while Eric Tracey – whose rise to the top of the leaderboard was not chronicled – has a lead of just twelve big blinds over Day 1A chip leader Martin Jacobson.

Due to the number of players still alive in the 2014 WSOP Main Event (approximately 3,300 from a total entry of 6,683), those who survived Day 1C will have their own Day 2 on Wednesday after players from Days 1A and 1B play out their own Day 2 tonight.

Consequently Players such as Daniel Negreanu (129,250 chips), McLean Karr (121,075 chips) and Gus Hansen (90,550 chips) will be able to enjoy a relaxing day off, while Phil Hellmuth (49,425 chips) Joe Hachem (48,175 chips) and Jonathan Duhamel (41,375 chips) will all be wishing they had performed a little better during their opening flight to ease the pressure when their Day 2 gets underway.

… While Others Catch the First Plane out of Vegas

Players whose 2014 WSOP came to an end yesterday included 2007 WSOP Champion Jerry Yang, who ran pocket Sevens into Iaron Lightman´s pocket Aces, 2013´s “last woman standing” Jackie Glazier, who failed to make her flush draw with Q♣ 10♣ against Lake Power´s J♦ J♠, and Tom Dwan – whose two pair in the last hand of the night were not good enough to improve past Ryan Snickles Ace-high flush.

Others to leave the Rio All-Suites Hotel and Casino with nothing more than shattered dreams included Fabian Quoss, Shannon Shorr and Marc-Andre Ladouceur, while at least cricketing star Shane Warne has a horrendous bad beat to relate to his grandchildren – having moved all-in with Ace-Ten on a Ten-high flop against an opponent with Ace-Six, and seeing the board run Ten-Nine-Eight / Seven to complete his opponents Ten-high straight.

Once late registration had closed, the prize pool amounted to $62,820,000 – slightly more than in 2013, but probably less than organizers had hoped for considering that online qualifiers were played in New Jersey and Nevada for the first time in three years.

Once the $10 million guaranteed first prize is removed from the prize pool, the runner-up in the 2014 WSOP Main Event will receive $5,145,968 and any player who makes it into November´s final table will be assured of $730,725. The bubble will burst when 693 players remain, and a min-cash is worth $18,406. Those in prime position to collect some of the money include: