Andrew Liporace leads the 2014 WSOP Main Event towards the money bubble, after a lively Day 3 on which many former WSOP Champions failed to progress. 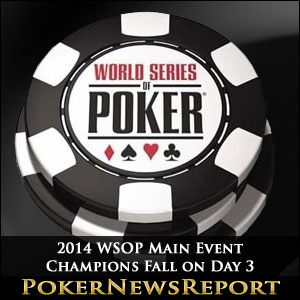 Andrew Liporace leads the 2014 WSOP Main Event towards the money bubble, after a lively Day 3 on which many former WSOP Champions failed to progress.

What had previously been a lumbering WSOP Main Event kicked into life last night as a number of players made a concentrated effort to ensure their place in the prize money, rather than being content to let the action happen around them.

For some, their efforts were rewarded with massive chip stacks virtually assuring them of a share in the $62.8 million prize pool – while for others, their attempts to impose their presence at the tables ended in disaster – sometime spectacular disaster.

At the close of five more levels of play, two players are closely matched at the top of the 2014 WSOP Main Event leaderboard with just over a million chips each. Andrew Liporace (1,128,000 chips) flew under the radar for most of the day and achieved his monster chip stack without any of his significant hands being witnessed.

Mehrdad Yousefzadeh by comparison, was seated at the same table as Phil Ivey for most of the day, and took a massive pot from the former chip leader A♣ Q♠ > A♥ K♦ to catapult himself up the chip counts, before becoming the first player to crack the 1 million chip barrier and eventually bagging and tagging 1,124,000 chips – just one big blind behind the chip leader.

Behind Liporace and Yousefzadeh (both poker players from the USA), a selection of nationalities are represented in the chasing pack. Spain´s Raul Mestre continued his good run in the 2014 WSOP Main Event to finish the night in third place, while further down the leaderboard the UK´s sole bracelet winner in this Series John Kabbaj eliminated Marcos De Siqueira in a massive, set-over-set hand to chip up beyond 500,000 chips.

Five former WSOP Main Event winners had survived through to Day 3 of the 2014 WSOP Main Event but, by the close of the day´s action, just one survived. Robert Varkonyi (winner in 2002) was one of a slew of players who failed to double-up during the opening level of Day 3, and he was quickly followed by Johnny Chan (winner in 1987 and 1988 for a combined total of $1,325,000!), whose paired A♠ was not good enough against Rocky McNatt´s K♠ 10♠ Turned flush.

Chris Moneymaker (2003) also fell to a Turned Spade flush against Raymond Ezzie A♠ K♠ > 8♣ 8♦ after Moneymaker had flopped a set of Eights, and Ryan Riess – who had been nursing a relatively small stack throughout the first three levels of the day – ultimately risked the lot with pocket Fours and ran into Steve Brecher´s 9♦ 9♣ – leaving Huck Seed (249,000 chips) as the only former winner (1996) in the event.

Greenstein and Negreanu Bust – Ashton Relies on Clubs Too Much

Other notable players to depart on Day 3 of the 2014 WSOP Main Event included Barry Greenstein – who ran A♦ 8♦ into an opponent´s pocket Aces – and Daniel Negreanu, who lost a stack of his chips with Ace-Queen against Jeffrey Chang´s pocket Kings, before Chang finished Negreanu off with a flopped flush against the 2013 WSOP POY´s two pairs.

Matt Ashton ended a disappointing Series by his standards in disappointing fashion. Having ground his stack up to 240,000 chips, he doubled-up an opponent when his 4♣ 5♣ failed to improved on the flop of 2♥ 3♣ 7♣, and then donated the rest of his chips to Konstantin Puchkov A♥ 10♥ > K♣ J♠ after missing all his outs following the flop of A♣ Q♣ 9♣.

As for the fortunes of the ladies, Brazilian female player Maria Mayrinck is one of a handful of ladies left in the 2014 WSOP Main Event, and she did her chances of her fifth cash in this Series (and twelfth overall in her career) when finding two pairs with Q♥ 10♥ to crack an opponent´s pocket Kings – Mayrinck finishing Day 3 with 293,000 chips.

Other chips counts for those still flying the flag for female poker players include Darlene Lee (373,500 chips), Vera Kelleher (271,000 chips), Dana Kellstrom (249,000 chips) and Lisa Tehan (179,500 chips); however, irrespective of how these ladies perform tomorrow (and hopefully on subsequent days), it has been a very poor 2014 WSOP Main Event for lady poker players.

Looking Ahead to Day 4 of the 2014 WSOP Main Event

Later today the remaining 746 players will re-convene in the Amazon Room of the Rio All-Suites Hotel and Casino to participate in Day 4 of the 2014 WSOP Main Event, knowing that fifty-three of them will leave empty-handed. The money-bubble will burst when just 693 players remain, and play will continue until another five levels have been completed.

When the announcement is made to “Shuffle Up and Deal”, the tournament will be entering Level 16 with blinds of 2,500/5,000 and a 500 chip ante. Those who we feel sure will make at least a min-cash in the 2014 WSOP Main Event include: