There was a late conclusion to the WSOP HORSE tournament, which saw Christopher Wallace defeat Randy Ohel just after 2:00am to win the bracelet and $313,715. 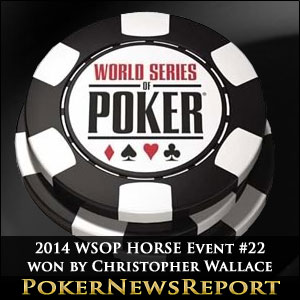 There was a late conclusion to the WSOP HORSE tournament, which saw Christopher Wallace defeat Randy Ohel just after 2:00am to win the bracelet and $313,715.

From exactly 200 entries, twenty-one players survived into Day 3 of the $10,000 buy-in HORSE tournament – Event #22 of the 2014 WSOP – among them plenty of previous bracelet winners, such as Daniel Negreanu, Bertrand Grospellier, and Justin Bonomo

Unfortunately Daniel Negreanu bust in eighteenth place when he missed a flush draw in a round of Omaha 08 against Lee Goldman, Bertrand Grospellier hit the rail in the following round of Stud, and Justin Bonomo fell to Calvin Anderson´s trip Fours in the Limit Hold´em round.

Last weekend´s winner of the Limit Omaha Hi/Lo bracelet Nick Kost was the final table bubble boy when Calvin Anderson´s A♥ 4♥ 4♣ 2♣ improved to flush against Kost´s K♦ K♥ J♣ 6♠ in a round on Omaha 08, after which the nine remaining players moved onto the final table stage in the Amazon room with the following chip stacks:

Four players quickly departed the final table during the early rounds of games. Bruno Fitoussi was eliminated in the first hand (Omaha 08) when his A♣ K♠ 8♦ 3♦ completely missed the board against Lee Goldman´s A♥ Q♥ J♦ 2♥ (which paired the Queen on the River); and – following Bill Chen´s triple up against Max Pescatori and Calvin Anderson in a hand of Razz – Anderson was sent to the rail in eighth place after being only able to make a pair of Deuces in the following round of Stud against Pescatori´s two pairs.

Bill Chen was unfortunate to be eliminated in seventh place during the next Limit Hold´em round – Christopher Wallace spiking the K♦ to complete his flush draw against Chen´s (A♣ J♣) flopped pair of Aces – and Lee Goldman knew his fate early in the next round of Razz, when Richard Sklar made an unbeatable Eight-low by sixth street to bust Goldman in sixth place.

Pescatori and Ashby Next to Hit the Rail

As Event #22 of the 2014 WSOP entered Level 22, Max Pescatori´s chip stack started to go into freefall. First he followed Christopher Wallace all the way to the River when Wallace had made a set of Aces, and then he lost a massive hand of Razz against Richard Sklar to be reduced to his final 120,000 chips. In his final hand (Razz), he got the last of his chips in against Randy Ohel with 5x Ax / Qx 2x, but the Razz Gods were against him and his board completed Ax Kx Jx, giving Ohel the hand with a Jack-low.

By comparison to Pescatori´s active participation in the tournament, Richard Ashby had been unusually quiet. Ashby had managed to pick up a few small pots throughout the day, but his stack had been chewed by Christopher Wallace in a hand of Razz during the previous level, and Wallace was again his tormentor in the next round of Stud Poker – completing a straight on the River to cripple the Englishman. Ashby´s final chips were taken soon after by Richard Sklar, whose Stud hand improved to a King-high flush to send Ashby to the Cashier´s desk for his second final table cash of the 2014 WSOP.

Despite being responsible for Richard Ashby´s elimination, Richard Sklar went into three-handed play as the shortest stacked of the three-remaining players. Randy Ohel and Christopher Wallace both forced big folds out of Sklar during the next round of Limit Hold´em and the last of Sklar´s chips went into the pot with K♣ 9♣ 3♣ 2♣ in the next round of Omaha 08. Randy Ohel made the call with A♠ K♦ 3♦ 2♠, and Ohel spiked the 4♦ on the river to make a wheel straight and bust Sklar from the event in third spot.

Randy Ohel took a narrow 3.1 million -v- 2.9 million chip advantage into the heads-up against Christopher Wallace, but Wallace moved into the chip lead in a hand of Razz, and he then scooped a massive pot with Sixes over Tens in the next game of Stud (6♥ 6♦ / 8♦ 6♣ K♥ 10♣ / 10♦) after Ohel had commented that he could beat Trips.

Wallace Fills the House for 2:00am Victory

In the final hand of the tournament, Christopher Wallace had put Randy Ohel all-in by the fourth street in a hand of Stud 08; but, as the cards were turned onto their backs, Randy Ohel was looking good to survive with a pair of Aces against Wallace´s pair of Deuces:

Wallace improved to trip Deuces on fifth street, but Ohel took the lead for the High hand when hitting a set of Aces on sixth street. Incredibly, Christopher Wallace found the 3♣ on seventh street to improve to a Full House; and, with neither player completing a Low hand, Ohel was bust in second place and Christopher Wallace become the $10,000 buy-in HORSE Champion in Event #22 of the 2014 WSOP.