Jeff Smith won his first WSOP bracelet and $323,125 first prize after overcoming Danny Nguyen in a marathon three-hour climax to the 2014 WSOP Event #9. 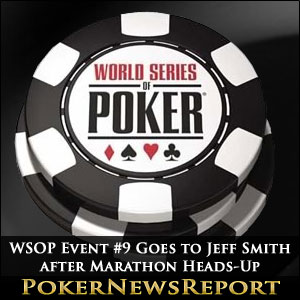 Jeff Smith won his first WSOP bracelet and $323,125 first prize after overcoming Danny Nguyen in a marathon three-hour climax to the 2014 WSOP Event #9.

Event #9 of the 2014 World Series of Poker was a $1,000 buy-in NL Hold´em Event which attracted a mammoth field of 1,940 players. The 198-player money bubble burst late on Day 1, and after a second long day of action twelve players returned to the Amazon Room of the Rio All Suites Hotel and Casino to play down to a winner.

The “official” final table of nine was set in little over an hour following the eliminations of Vinny Pahuja (A♥ J♥ < Chris Hunichen´s K♠ K♣), Dylan Linde (A♥ J♥ < Hunichen´s Q♥ Q♠) and Cornel Meades (K♠ K♣ < Danny Nguyen´s Q♠ J♠ flopped flush), with Hunichen having a narrow chip advantage over Frank Patti at the top of the chip counts.

Nguyen Rises to the Top as Hunichen Crashes Out

The action at the beginning of the final table was fast and furious. Jorge Vergara was the first player to depart in only the second hand of the final table when moving all-in from the button with 10♦ 10♥ and running into Frank Patti´s Q♠ Q♦; while John Fontana flopped a set of Tens to more than double-up against Chris Haugo (Q♥ Q♦) and Chris Hunichen (A♦ K♦) – with Haugo winning the substantial side pot to reduce Hunichen to 415,000 chips.

Frank Patti bust David Inselberg in eighth place A♠ K♠ > 8♣ 8♠, but his place at the top of the leaderboard was quickly usurped by Danny Nguyen, who eliminated Brad Lisbon in seventh place K♦ K♥ > A♣ 8♦ and then came from behind with a flopped King to send Chris Hunichen to the rail in sixth place K♠ 7♠ > A♠ 3♠.

Smith´s Stack Grows as he Eases into Lead

As the game moved into Level 24 (blinds 12,000/24,000 – ante 4,000), Jeff Smith managed to keep tabs on the chip leaders by moving all-in at key moments and taking down uncontested pots. On the few occasions when hands went to showdown, Smith always had the better hand, and he chipped up significantly when his 5♦ 5♥ improved to a Full House over Frank Patti´s trip Threes.

Danny Nguyen extended his chip lead with the elimination of Chris Haugo in fifth place 10♣ 10♥ > A♥ K♣, but Jeff Smith was right on his tail after busting out John Fontana in fourth place J♣ J♠ > 9♦ 9♣, and Smith took over at the top of the leaderboard when his A♥ J♥ Turned two pairs to relieve Nguyen of 265,000 chips.

Despite Danny Nguyen busting Frank Patti in third place K♣ Q♣ > A♦ 4♠, it was Jeff Smith who took a 3.315 million -v- 2.10 million chip advantage into the heads-up, and for more than an hour the chips trickled back and forth until Nguyen forced Smith off of a 1.8 million chip pot with four hearts on the board to take a narrow lead.

Jeff Smith fought back, and opened up a gap between the two players before Nguyen spiked a straight against Smith´s top pair to double back up into the lead 4♦ 6♣ > Q♦ 9♦. Jeff Smith doubled back into the lead when calling a Nguyen bluff A♥ J♦ > 9♦ 6♦, but the chip stacks were reversed once more when Nguyen found pocket Jacks to double up against Smith´s pocket Threes.

Following the dinner break – two levels into the heads-up – Smith took the chip advantage once again when his pocket Nines flopped a set against Danny Nguyen´s (A♥ 8♠) rivered two pairs, and throughout the next level, Smith used his chip advantage to grind Nguyen down. Nguyen managed one double-up at the beginning of Level 29 (Q♦ 10♣ > 2♣ 2♥), but the next hand proved to be the last of the tournament.

The action in the deciding hand all happened pre-flop, when Danny Nguyen responded to Jeff Smith´s 160,000 chip bet from the button by announcing he was all-in. Smith made the call and the cards were on their backs:

The flop of 9♣ 3♥ 5♠ put Jeff Smith firmly ahead in the hand, and the {10♦ç on the Turn was of little help to Danny Nguyen. The 9♠ on the River gave Jeff Smith victory in the hand, and in the event – enabling him to pick up the $323,125 first prize and his first World Series of Poker bracelet.