Part-time player Jonathan Dimmig sensationally recovered from being crippled at the final table to take down the 2014 WSOP Millionaire Maker for $1,319,587. 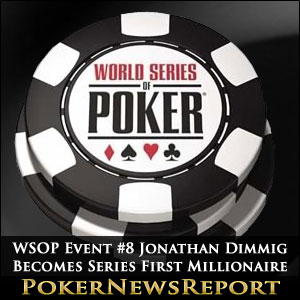 Part-time player Jonathan Dimmig sensationally recovered from being crippled at the final table to take down the 2014 WSOP Millionaire Maker for $1,319,587.

The 2014 WSOP Millionaire Maker set new records for a non-Main Event tournament when 7,977 entries were received over the two opening days of the $1,500 buy-in event. Only the 2006 Main Event (8,773 entries) has seen more players enter a poker tournament anywhere in the world, and considering that the highlight of the World Series of Poker has many more opening flights, the WSOP should be commended for organising the event so well. 819 players cashed in the event when the money bubble burst on Day 2 and after eight levels of action on Day 3, the field was reduced to a final table of nine – led by massive chip leader Stephen Graner.

Graner Off the Top within Three Hands

With blinds of 40,000/80,000 (ante 10,000) when the final table of the Millionaire Maker WSOP Event #8 got underway, nobody was in imminent danger of being blinded out, but that did not stop the action coming thick and fast.

In only the third hand of the day, Stephen Graner lost the chip lead to James Duke when Duke´s K♦ K♣ held against Graner´s A♠ 5♠. Graner then lost more chips to Bradley Anderson when Anderson responded to his pre-flop four bet by moving all-in, but he recovered to hold a mid-table position when eliminating Maurice Hawkins in ninth place K♦ K♥ > Q♣ Q♥.

Dimmig Soars to the Top of the Chip Counts

Jonathan Dimmig had arrived at the final table with a “never sit back and wait” attitude, and he was involved in much of the early action – doubling up against Andrew Dick 9♠ 6♠ > 6♦ 5♠ before eliminating Dick in eighth place A♦ 10♦ > K♦ 8♥.

Dimmig then relieved Bradley Anderson of 650,000 chips when he paired his A♠ 4♠ against Anderson´s A♣ Q♠ and, after Jeffrey Coburn had bust Jason Johnson in seventh place A♥ 9♥ > Q♦ 10♣, the six remaining players went into their first break with Jonathan Dimmig having a chip stack in excess of 10 million chips.

How to Lose 14 Million Chips in One Level

However, Dimmig´s four opponents started making inroads into his chip stack and, after doubling up Bradley Anderson A♥ Q♦ > A♦ J♠, he folded in a big pot against James Duke after committing 2 million chips in the early betting rounds and failed to bluff Jeffrey Coburn off a four million chip pot to become the shortest-stacked of the five remaining players.

James Duke became the new chip leader when eliminating Bradley Anderson in fifth place Q♠ Q♥ > A♦ 10♣, and despite Jonathan Dimmig doubling up against Duke K♥ 7♦ > A♦ J♦, Dimmig was still the shortest-stacked player with 5.4 million chips as the four remaining players broke for dinner and returned to blinds of 150K/300K (ante 5,000)

Whatever ever Jonathan Dimmig had to eat certainly made a difference to his game, and when play was back underway Dimmig chipped up in a number of small pots to move into third place, and then bust Andrew Teng in fourth place with a set of Deuces > Teng´s paired Q♣ 9♣.

Coburn Leads into Heads-Up, But Dimmig Goes onto Win

From the game going three-handed to the eventual conclusion, the 2014 WSOP Event #8 Millionaire Maker was all about Jonathan Dimmig winning his flips. A double up against James Duke when his 4♥ 4♠ held against Duke´s Q♥ J♠ enabled Dimmig to increase his stack to 10 million chips – a stack sufficiently large enough for him to bust Duke in third place A♥ 10♠ > Q♠ 8♦.

Nonetheless Jeffrey Coburn had a massive 22.85 million -v- 13.05 million chip advantage over Jonathan Dimmig as the heads-up began – an advantage that was reversed in the first hand of the heads-up when Dimmig flopped two pairs with 9♣ 8♥ and avoided a fourth diamond on the River that would have given Coburn victory.

The final hand came just a few minutes later – Dimmig moving all-in with 6♥ 2♥ after flopping a pair of Deuces, and Coburn making the call with K♥ Q♥. The board finished Ten-high, and Jonathan Dimmig had become the first millionaire winner of a 2014 World Series of Poker Event.