There was an explosive conclusion to Event #48 of the 2014 WSOP, when Tyler Patterson rivered a flush draw to seal victory in the PL Omaha Hi/Lo tournament. 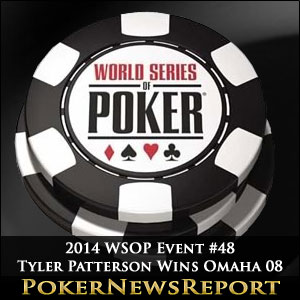 There was an explosive conclusion to Event #48 of the 2014 WSOP, when Tyler Patterson rivered a flush draw to seal victory in the PL Omaha Hi/Lo tournament.

The growing popularity of PL Omaha Hi/Lo was evident when 991 players ponied up the $1,500 buy-in into Event #48 of the 2014 WSOP – the fourth year in a row that the field size for this event has increased over the previous year and the largest field ever assembled for a WSOP PL Omaha Hi/Lo tournament.

The 117-player money bubble burst early on Day 2 when Jeff Masden´s flopped pair of Tens were too good for his opponent´s pair of Threes, and Masden was still involved in the game when the final table was set during the first level of Day 3:

Patterson Off Top as Clements and Masden Climb

Despite his big chip advantage, Tyler Patterson did not have things all his own way. Shortly after Derek Raymond had sent Philip Sternheimer to the rail in tenth place with a Turned Wheel, Patterson chipped up Cody Crawford and doubled up Tom Schneider; and it Scott Clements who took over at the top of the leaderboard when his A♠ A♣ J♦ 3♠ improved to a Full House on the Turn to eliminate Dylan Wilkerson in ninth place.

Jeff Masden took a turn at the top of the chip counts when eliminating J.R. Flournoy in eighth place with a runner-runner flush – a hand which also saw Tom Schneider lose a stack of his chips in the three-way pot – and then Masden and Schneider combined to send Derek Raymond to the rail in seventh place, when both Masden and Schneider flopped a Jack-high straight and Raymond missed his flush draw.

Patterson Recovers to Lead into Heads-Up

Tom Schneider eventually lost the last of his chips to Masden when Masden´s A♥ 10♥ 7♠ 2♥ improved to two pairs against Schneider´s A♠ A♦ K♥ 7♥, but thereafter Tyler Patterson took control of the final table – turning a King-high straight against Scott Clements, crippling Cody Crawford with a rivered Full House, and then eliminating Gary Kosakowski A♣ A♦ 9♦ 4♦ > A♠ 9♠ 6♦ 3♦ to have more than half the chips in play as the game went four-handed.

Tyler Patterson extended his chip advantage in only the second hand of the heads-up when his 8♥ 7♣ 3♣ 2♠ rivered a club flush, and he then found two pairs on the board to establish a 6-to-1 chip lead. Scott Clements made a small recovery when forcing a fold out of Patterson on a flop of Q♠ J♠ 8♠ and doubling up with an Ace-Five wheel, but then there was an explosive conclusion to Event #48 of the 2014 WSOP.

After getting 300,000 chips into the pot in the pre-flop action, both players checked the flop of K♣ 10♦ 2♥. Following the Turn of 7♣, Patterson checked, Clements bet 250,000 chips, Patterson re-raised to 800,000 chips and Clements shoved all-in for 1.58 million chips. Patterson made the call and the cards were on their backs:

Patterson: A♠ 9♣ 8♣ 3♠ for the nut low draw, open-ended straight draw and a better flush draw than Clements

The most likely outcome was that the pot would be chopped, but the 2♣ spiked on the River to give Tyler Patterson victory in the hand and the PL Omaha Hi/Lo bracelet.