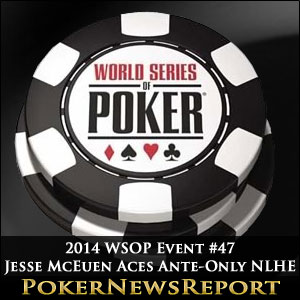 Event #47 of the 2014 WSOP was an “Ante-Only” NLHE tournament in which the ante increased with every level, and players would enter a pot in multiples of whatever the smallest chip in play was at the time. Thereafter, betting actions were the same as in a “regular” NLHE tournament; but, with antes coming out in every hand, there was no benefit in playing tight aggressive poker – and the action in this tournament was far more animated than in many other WSOP events.

As the only other event to start on the same day as this was the Player´s Championship, Event #47 of the 2014 WSOP got a good turn-out – with 714 players paying the $1,500 buy-in to participate in this unique event. Most acknowledged immediately that a different strategy was needed than for regular tournaments, but no amount of strategy could account for some of the bad beats that took place throughout the opening two days.

Jesse Capps started the ball rolling by being bust out in the first hand of the event after flopping trip Sixes, moving all-in and getting a call from an opponent. The opponent also had trip Sixes, but with an Ace kicker and Capps was the first player to leave the event – before most of the players had even taken their seats. The bad beats continued until just nine players remained to contest the Ante-Only bracelet and $212,093 first prize:

No Hanging Around when Final Table Begins

When the final table got underway, blinds (minimum bets) were 1,000 chips (the smallest denomination chip in play at the time), while every player had to pay an ante of 6,000 chips. Despite nobody being particularly at risk, four players busted within the first three orbits of the button.

Arthur pro was the first player to depart after looking good to double-up with A♥ 10♠ on the board of 9♦ 8♦ 2♥ / A♠ against Rhys Jones´ Q♣ 10♣. Unfortunately for Pro, the J♥ spiked on the River to make Jones a gutshot straight, and Arthur pro was bust in ninth spot.

The next player to be eliminated was Jeremy Joseph. The overnight chip leader had been pretty quite during the first orbit of the button, and had consequently seen his chip stack reduced by 50,000 chips, while Jonas Lauck had chipped up to the top of the leaderboard in a big pot against Ryan D´Angelo.

The next two eliminations occurred within three hands, and were far more straightforward – Herbert Yarbrough running his 4♣ 5♣ into Ryan D´Angelo´s A♥ A♣, and then D´Angelo busting in sixth place when his J♣ 10♣ was out-flopped by Simeon Naydenov´s A♦ K♥.

Going into the second level of the day, the two shortest stacks both doubled-up to keep the chip counts relatively level – Adam Levy spiking an Ace on the River to double up against Simeon Naydenov A♦ Q♥ > 3♦ 3♠, and Rhys Jones flopping a pair of Queens to put the brakes on Jonas Lauck A♠ Q♣ > 10♦ 10♥.

Levy and Jones then engaged in a betting war after the flop of Q♣ 8♦ A♦ and were both all-in – with Adam Levy (A♠ Q♦) ahead in the hand with two pairs against Rhys Jones´ (K♦ 4♦) flush draw. Unfortunately for Levy, his luck ran out with the 5♦ on the Turn, and he was sent to the rail in fifth place.

Rhys Jones moved into a commanding chip lead when busting Simeon Naydenov in fourth place A♣ K♠ > A♠ Q♥, but then it all went wrong for the Englishman – who doubled up Jonas Lauck A♥ 9♥ > A♣ 4♥, and was then crippled by Lauck 5♣ 6♠ > J♣ J♦ when Lauck flopped two pairs.

Everything in the heads-up went Jesse McEuen´s way as Jonas Lauck´s luck deserted him. McEuen levelled up the chip counts with a pair of Kings against Lauck´s flopped pair of Nines, and then hit a runner-runner flush for another half million chip pot. A flopped pair of Aces gave Jesse McEuen saw chunk of chips move in his direction and, in the first hand of Level 25, it was all over.