Will Givens was late for the start of Day 3, and went AWOL at the start of the final table, but was there when it mattered to win Event #45 of the 2014 WSOP. 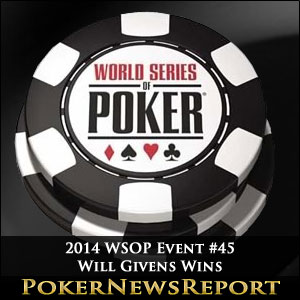 Will Givens was late for the start of Day 3, and went AWOL at the start of the final table, but was there when it mattered to win Event #45 of the 2014 WSOP.

There was an incredible amount of action on the final day of the $1,000 buy-in NL Hold´em Event #45, as the eleven survivors from the 1,841 that entered the tournament contested the $306,634 first prize and the coveted WSOP bracelet.

The tempo for the day was established in the first hand of play when Paul Sokoloff doubled-up against Terik Brown 7♥ 7♣ > A♠ Q♣ – with Brown being bust in the next hand by Loren Klein A♣ A♥ > A♠ 10♠ – and the nine-handed final table was set shortly after when the late-arriving Will Givens also found Aces to eliminate Kim Ng.

Will Givens was late returning to the final table, and almost missed Patrick Curzio doubling up against Ivan Saul 8♥ 9♥ > 7♣ 7♦, but will probably wish he had stayed away for longer due to being forced out of a massive pot by Angela Prada-Moed – folding what he claimed was a pair of Kings.

Givens recovered some of chips when making a diamond flush to bust Loren Klein in ninth place A♦ 10♦ > A♥ J♠, and Patrick Curzio completed the demolition of Ivan Saul´s stack A♦ Q♠ > J♦ 10♣ to send the Argentinean to the rail in eighth spot.

The final table was still within the first three orbits of the button when Angela Prada-Moed moved into a commanding chip lead by busting out Dmitrii Shchepkin in seventh place A♥ K♦ > 8♥ 9♥ and Duy Ho in sixth place 7♥ 7♣ > K♠ 10♦, to become the first player through the 2 million chip barrier.

Whereas some players quietly ladder their way up the payouts, Will Givens was the ultimate action man at the final table of WSOP #45 – and not always successfully. Givens was knocked back below 1 million chips when running into David Haas´ A♠ A♣, and then doubled-up Patrick Curzio K♦ 10♥ > A♣ 2♣.

Givens doubled up against Haas when his 6♣ 5♣ rivered two pairs, and then made a set of Jacks against Paul Sokoloff to move back into second place in the chip counts. However, as the first full level of the day came to a close, he still had plenty of work to do in order to catch runaway leader Angela Prada-Moed.

Prada-Moed regained the chip advantage when pairing an Eight to best Givens pair of Sevens, and went almost a million chips ahead of Givens and Paul Sokoloff when eliminating David Hass in fourth place 5♦ 5♣ > A♥ 8♣ with a flopped set of Fives.

Paul Sokoloff briefly took the chip advantage when spiking a Queen on the River to double-up A♥ Q♦ > 2♦ 2♥ against Angela Prada-Moed, but Will Givens caught a spade flush to double up against the chip leader A♠ J♠ > K♥ K♦, and then eliminated Sokoloff in third place 7♦ 7♥ > A♥ 9♥ to take a 4.2 million -v- 1.3 million chip advantage into the heads-up against Angela Prada-Moed.

Will Givens Makes Up for Last Week´s Disappointment

The heads-up conclusion to Event #45 of the 2014 WSOP only lasted 31 hands, but in that time Angela Prada-Moed doubled up against Will Givens 7♣ 7♦ > 5♠ 5♥ before Givens rivered trip Aces to cripple Prada-Moed, before Prada-Moed flopped a Broadway straight to double up once again. In the final hand, Angela Prada-Moed moved all-in after the flop of J♦ A♣ 8♣ and Will Givens made the call:

Angela Prada-Moed was still alive after the A♦ on the Turn, but the 6♠ put an end to her aspirations of being the second woman to win an open event at the 2014 WSOP (after Vanessa Selbst took down Event #2); while Will Givens made up for the disappointment of blowing the chip lead in last week´s Event #33 to claim the bracelet and the $306,634 first prize.