There was a protracted conclusion to Event #44 of the 2014 WSOP, as Jordan Morgan and Evan McNiff battled out the conclusion of the event for almost 8 hours. 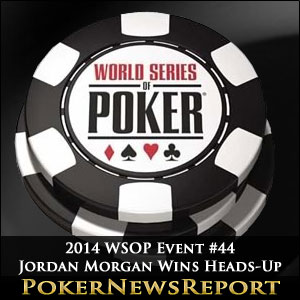 There was a protracted conclusion to Event #44 of the 2014 WSOP, as Jordan Morgan and Evan McNiff battled out the conclusion of the event for almost 8 hours./strong>

Even though Jordan Morgan and Evan McNiff tried to conclude Event #44 of the 2014 WSOP within three days, it still took a fourth day to wrap up the event after the two players exhausted themselves playing a six-hour heads-up session on Monday´s Day 3.

To re-cap, Day 3 of the tournament had been a day of two halves – a torrent of quick eliminations followed by a chess-like heads up, as the fortunes of the heads-up protagonists swung one way and then another.

Day 3 in a Nutshell

Fifteen players had survived the first two days from a total entry of 1,914 for this $1,500 buy-in NL Hold´em event; and the nine-handed final table was set within four hours of Day 3 when Jordan Morgan´s flopped set of Queen´s best Brandon Ageloff´s turned set of Nines.

Jordan Morgan´s elimination of Brandon Ageloff came in the biggest pot of the tournament seen so far, but it was Evan McNiff who went to the final table with the chip lead after having started the day with just 294,000 chips. McNiff had enjoyed a sensational first couple of levels in which he had doubled up A♠ Q♠ > 6♥ 6♣ against Justin Conley, doubled up again against Vinny Pahuja A♠ 3♠ > 6♠ 6♣ and then sent Mark Wilds to the rail in eleventh place Q♦ Q♣ > A♦ 2♦.

Race to the Cashier Led by Anselm

With blinds of 15,000/30,000 (ante 5,000) when the final table got underway, it did not take long for the shortest-stacked players to gamble with their tournament lives – and pay the price. Michael Anselm led the race to the cashier when he moved all-in on the sixth hand of the final table with A♥ 9♥. Bryan Dillon (A♦ K♣) made the call and spiked the K♥ on the River to send Anselm to the rail in ninth place.

Ryan Spittles was to follow just two hands later – being ahead in the pre-flop action with A♥ K♥ -v- Jason Johnson´s A♦ 10♣, but Johnson pairing his Ten on the all-club flop to bust Spittles in eighth place – and Joseph Iarussi finished in seventh place after calling Evan McNiff´s bet following the flop of 2♦ 7♠ 7♦ with 9♥ 9♦, but failing to find the necessary improvement to beat McNiff´s (6♥ 7♥) flopped trip Sevens.

Morgan Leads McNiff into the Heads-Up

As six-handed play started, the pace of eliminations accelerated even more. Robert Chorlian found no joy with J♥ 9♣ against Jason Johnson´s A♦ J♠ to be eliminated in sixth place; and Bryan Dillon was first crippled by Johnson K♠ {10}♠ > 8♦ 8♣ before being bust in fifth place by Jordan Morgan Q♥ J♣ > 7♠ 4♥.

Thereafter Jordan Morgan was on a roll, and he took a 6,863,000 -v- 1,750,000 chip advantage into the heads-up against Evan McNiff when sending Ray Foley to the rail in fourth place A♦ 4♦ > K♠ 9♦ and then Jason Johnson in third spot with a rivered set of Eights > Johnson´s flopped pair of Aces.

The climax to Event #44 of the 2014 WSOP was a complete contrast to the action that preceded it. It had taken just 74 hands to reduce the final table from nine players to just two, but it took a further 257 hands until a winner was determined.

With blinds starting at 25,000/50,000 (ante 5,000) the two players played small-ball poker up until the dinner break, by which time the relative chip stacks had hardly moved at all. Following the break, Evan McNiff started to make a few inroads into Jordan Morgan´s stack and, after another full level of patient play, McNiff took the chip lead when turning a club flush with 3♣ 6♣.

Morgan Escapes with a Rivered Ace

Evan McNiff had the opportunity to wrap the tournament up in the 125th hand of the heads-up – pushing all-in with K♣ K♦ and getting a call from Morgan (A♠ K♥), but the A♣ spiked on the River to double Morgan up and put him back into the lead.

The small-ball poker continued throughout Levels 29 and 30, with Evan McNiff continuing to chip away at his opponent´s chip stack and regain the advantage. By the end of Level 30 – and after nearly six hours of heads-up play, the two players chose to play on rather than call a halt on the action.

The River Saves Morgan Yet Again – into Day 4

Day 4 started in much the same way as Day 3 had concluded – the two players sharing small pots between them – but as Level 32 started, Jordan Morgan started to 3-bet shove all-in more frequently and he developed a 2 million chip advantage without a hand going to showdown.

It was inevitable that there would come a time when Evan McNiff would call one of Jordan Morgan´s shoves, and when he did it turned out to be a classic flip – Morgan shoving with 6♦ 6♣ and McNiff calling with A♣ K♦. There was no joy for Evan McNiff on the board of J♣ 3♠ 4♠ / 4♣ / 9♣, and Jordan Morgan had won Event #44 of the 2014 WSOP.