George Danzer won the Stud Hi/Lo Event #38 to collect his second WSOP bracelet in eleven days and move to the top of the WSOP Player of the Year rankings. 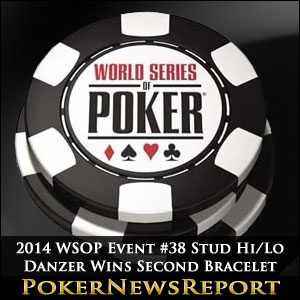 George Danzer won the Stud Hi/Lo Event #38 to collect his second WSOP bracelet in eleven days and move to the top of the WSOP Player of the Year rankings.

Just eleven days after George Danzer denied Brandon Shack-Harris his second bracelet of the summer in the Razz Event #18, Danzer himself scored his second success to take the lead in the WSOP Player of the Year rankings ahead of Justin Bonomo. However, his victory was not without a little controversy.

From a field of 134 players who paid the $10,000 buy-in for Event #38 of the 2014 WSOP, thirteen returned for Day 3 of the Stud Hi/Lo tournament. George Danzer had entered the final day with a healthy chip over the rest of the field – an advantage he extended when making a Full House of Kings over Nines to knockout both John Monette in eight place and Richard Sklar in ninth place to set the final table:

David Singer was the first casualty of the final table when George Danzer made an Eight-high straight on sixth street to best Singer´s pair of Aces and missed low hand; and Singer was shortly followed to the cashier´s desk by Chris George, who opening pair of Kings failed to get any better against Brian Hastings´ two pairs.

As the blinds increased to 25,000/50,000 (ante 5,000) Jeff Lisandro got the last of his chips in with A♠ A♥ / K♣, but ran into Brian Hastings´ Q♦ Q♠ / Q♣ and failed to find another Ace to avoid elimination in fifth place, but Hastings himself was soon on life support after losing big pots to Calvin Anderson and George Danzer (both of whom made flushes), and was eliminated in fourth place when he missed his club flush and fell to George Danzer´s Ten-high straight.

As the game went three handed, a controversial hand took place which resulted in John Racener´s chip stack being decimated. George Danzer had been the aggressor through all streets of betting and John Racener had gone along with him. At the showdown, Racener turned over Trip Threes, and Danzer – thinking he was beaten – picked up his cards. He put then down quickly when he realised that he had rivered a diamond Flush, but Racener argued that Danzer´s hand was dead because he had picked it up.

The floor was called, who ruled that Danzer´s hand was still alive because he had only picked them up to look at them, and had not passed them back to the dealer. Racener was not satisfied with this explanation, and called a second floor over. When the second floor confirmed the ruling, Racener insisted that tournament director Jack Effel was consulted. Effel explained that, as Danzer was not facing a bet when he picked up his cards, he should be awarded the pot. Subsequently Danzer added another 380,000 chips to his stack, while Racener was left with just 100,000 chips.

Despite the demoralising decision, John Racener staged a remarkable recovery after the dinner break. Three double ups against Calvin Anderson enabled Racener to chip up to 980,000 chips, while Anderson was reduced to the short stack. George Danzer took the last of Anderson´s chips with trip Jacks > Anderson´s two pairs – enabling him to take a 2,480,000 -v- 1,600,000 chip advantage into the heads-up against Racener.

All of the early hands of the heads-up went in favour of George Danzer; and, with blinds now at 60,000/120,000 (ante 15,000), he reduced John Racener to his last 435,000 chips with two pairs > Racener´s missed low hand. Racener flirted with elimination for several more hands – doubling up once and sharing a couple of split pots, before the last of his chips went in after four-betting Danzer on third street:

John Racener held a slight advantage when the cards were on their backs, but George Danzer paired his King on fifth street. Racener caught a Queen on sixth street, but it was not enough to prevent Danzer winning the hand and his second WSOP bracelet in eleven days.