Steven Wolansky won his first bracelet in Event #36 of the 2014 WSOP to compensate for his unfortunate heads-up defeat in last year´s WSOP 8-Game tournament. 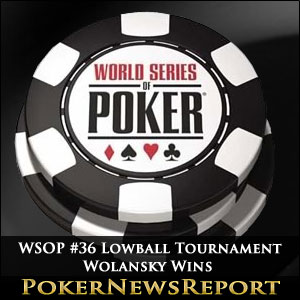 Steven Wolansky won his first bracelet in Event #36 of the 2014 WSOP to compensate for his unfortunate heads-up defeat in last year´s WSOP 8-Game tournament.

About this time last year, Steven Wolansky had a massive chip advantage in the heads-up of the $2,500 buy-in 8-Game Mixed Event, when a cruel bad beat gave Michael Mann the momentum to claim victory in the tournament.

Wolansky has already made an impression in the 2014 WSOP, having recorded three cashes; but last night he achieved his long-awaited victory in the $1,500 buy-in 2-7 Draw Lowball event after overcoming 2009 November-Niner Joseph Cheong and German soccer star Max Kruse at the final table.

For a relatively low key tournament, the 241 entries attracted a host of famous names. Ami Barer, Scott Seiver, Erik Seidel, Dominik Nitsche, Mike Matusow, Antonio Esfandiari and Greg Raymer were just a few of the more recognisable players to fall on Day 1, while Brian Rast, Phil Hellmuth, Mike Leah and Chino Reem were among those who cashed when the money bubble burst early on Day 2.

The six-handed final table was set just after the Dinner break on Day 2, when German soccer star Max Kruse eliminated Scott Bolman with a Ten-Eight low > Bolman´s Ten-Nine low, and the chips were bagged and tagged immediately so that there were some players left to compete for the bracelet on Day 3.

When play resumed yesterday, there were just 5 minutes remaining in Level 17 (blinds 2,000/4,000 – ante 1,000), but that was long enough for Max Kruse to twice win significant pots against Steven Wolansky. Wolansky recovered in the following level by doubling up through Samuel Touil with a Ten-Seven low over Touil´s Ten-Nine low; and soon after Touil was eliminated in sixth place when his 8x 7x 3x 2x paired on the exchange and was beaten by Joseph Cheong´s Ten-Nine low.

Joseph Cheong then eliminated Orjan Skommo in fifth place with a Queen-low when Skommo also paired his dominating hand on the exchange, and busted Christopher Meklin in fourth place with the perfect 7x 5x 4x 3x 2x. However, Cheong could not establish an advantage over Steven Wolansky, who took a 60,000 chip pot and a 120,000 chip pot from Cheong to have a lead of five Big Blinds as the games went three-handed.

Cheong Leads into Heads-Up, but Wolansky Battles Back to Win

The early exchanges between the two players in the heads-up of Event #36 saw Wolansky creeping closer to Cheong´s chip stack with a series of small pots; but the pivotal hand came twenty-five hands into the climax of the tournament when Wolansky scooped a 160,000 chip pot with a Ten-Nine low against Cheong´s mucked hand.

An all-in shove by Wolansky following a Cheong three-bet to 50,000 chips resulted in Cheong folding and his chip stack being depleted even more before the concluding hand of the tournament – when Steven Wolansky moved all-in once again and Joseph Cheong made the call. Cheong stood pat with his 10x 7x 6x 3x 2x, and Wolansky exchanged one of his cards, leaving 8x 7x 5x 2x. The dealer dealt the 9♠ for a Nine-low hand, and Steven Wolansky had made up for his heads-up defeat in last year´s 8-Game Mix event by taking down Event #36 of the 2014 WSOP.