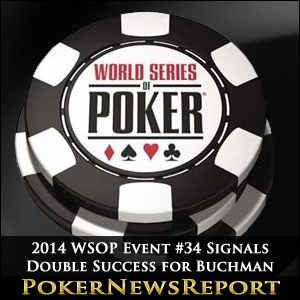 Organizers of the 2014 WSOP will be pretty disappointed at the turn-out for this Seven Card Stud tournament, as only 345 players ponied up the $1,500 buy-in to create one of the smallest fields for a low buy-in event this year.

Sixty players survived through to Day 2 of Event #34, and the bubble burst when there were just forty players remaining. A series of quick exits followed, and play for Day 2 was halted half a level short of the scheduled ten levels when just six players were left.

Despite the tournament finishing early on Day 2, blinds were 8,000/16,000 (ante – 2,000) when the game resumed. This meant that only Denisov and Thompson at the top of the leaderboard had stacks bigger than ten Big Bets and this led to some fairly hectic early action from the short stacks.

Shortest-stacked Nabih Helmi was eliminated in the first hand of the day when his opening pair of Jacks (Q♥ J♠ / J♦) failed to improve past Alex Kravchenko´s pair of Aces; and Bryn Kenney was bust almost immediately when Kravchenko spiked a set of Fours on sixth street to best Kenney´s pair of Tens.

Alex Kravchenko had made an excellent start, but Eric Buchman took three streets of value from the Russian with two pairs to improve his position to second on the leaderboard before the first half-level of play drew to a close.

Eric Buchman moved into the chip lead early in Level 21 (blinds 10,000/20,000 – ante 2,000) when hitting two pairs against William Thompson and then betting every street against Aleksandr Denisov and forcing the second Russian in the field to fold after sixth street.

Alex Kravchenko and Aleksandr Denisov also took valuable pots from Thompson, and Thompson was bust in the first hand of Level 22 when all in on fifth street with J♣ 9♣ / 5♣ 3♥ 3♦ against Denisov´s A♥ A♣ / 7♣ 2♥ 2♦. Unfortunately for Thompson his lowly pair failed to improve past Denisov´s two pairs and he was eliminated in fourth place.

Soon after Eric Buchman made a straight on seventh street to reduce Aleksandr Denisov to fewer than ten big bets, and Denisov was sent to the rail in third place when Buchman spiked a set of Jacks on fifth street to best Denisov´s two pairs – Buchman taking a 995,000 -v- 558,000 chip advantage into the heads-up against Alex Kravchenko.

The heads-up climax to Event #34 of the 2014 WSOP did not last long, with the majority of small-pot hands going to Eric Buchman. The pivotal hand came half way through Level 23 (blinds 15,000/30,000 – ante 3,000) when Buchman again completed a straight on seventh street to reduce Kravchenko to 34,000 chips; and several hands later he was all in by fourth street:

Eric Buchman´s pair of Tens was ahead, but Alex Kravchenko´s hand had plenty of options. Buchman made a set of Tens on fifth street with the 10♥, but Kravchenko picked up an open-ended straight with the 5♠. Unfortunately for Kravchenko, Buchman was dealt the 6♣ on sixth street to complete a Full House and make Kravchenko´s hand irrelevant – Eric Buchman winning his second bracelet after victory in the 2010 Limit Hold´em Event.