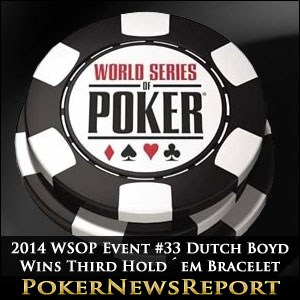 There was an animated conclusion to Event #33 of the 2014 WSOP, as Dutch Boyd fist-pumped and high-fived his way to victory in the $1,000 buy-in NL Hold´em tournament, spurred on by his equally animated supporters on the rail.

Boyd´s victory gave him his third WSOP bracelet following wins in 2006 and 2010; but whereas both his previous victories had come in short handed tournaments, Boyd had to overcome a strong final table of ten when play resumed in the Amazon Room of the Rio All Suites Hotel and Casino last night.

There was a fairly brisk start to the final table, with David Olmsted being sent to the rail after just one orbit of the button – his A♣ Q♠ failing to connect with the board against Paul Cogliano´s 8♣ 8♥ – and before the end of the first level Olmsted had been joined by Chad Dixon (K♣ J♥ < Christopher Sensoli´s A♠ J♥) and Gabriel Nassif (Q♦ J♠ < Vinny Pahuja´s A♠ Q♥).

There was no slowing down of the action during the second level (Level 24 – blinds 12,000/24,000 – ante 4,000) as Dutch Boyd eliminated Vinny Pahuja 10♠ 10♣ > 2♥ 2♠ to move into the chip lead, Christopher Sensoli (A♥ Q♣) bust to Paul Cogliano´s rivered straight and Pok Kim failed to hit her open-ended straight draw against Will Givens´ Trip Eights to leave the tournament in fifth place.

Dutch Boyd´s chip advantage encouraged him to become the most active player at the final table, but not always successfully. He was the first player to get beyond 2 million chips when rivering a pair of Queens to take a 560,000 chip pot from Will Givens, but after Paul Cogliano had eliminated Givens in fourth place A♠ 4♠ > A♣ 9♠, Boyd´s stack started to go into freefall.

Boyd lost 240,000 chips to Steven Norden when he missed an open-ended straight draw, and then became the short stack of the trio that remained when doubling up Norden Q♠ 10♦ >8♣ 7♦. A fortunate double-up against Paul Cogliano with a rivered Seven (A♠ 7♦ > A♣ K♥) and then a equally fortunate two pairs > top pair against Cogliano gave Boyd the momentum to climb back up the leaderboard; and he took a narrow 2,800,000 -v- 2,275,000 chip lead into the heads-up when busting Cogliano in third place A♠ 9♠ > 7♦ 6♦.

Dutch Boyd´s good fortune continued into the heads-up encounter against Steven Norden as he rivered a pair of Jacks to extend his chip lead and then trip Tens on the Turn to extend his advantage. Even the manner of the winning hand was a little fortuitous – Steven Norden moving all-in on the board of 3♠ 7♦ 3♥ / A♣ 6♥ and Boyd making the call: