Joe Cada became only the second WSOP Main Event winner to subsequently win another bracelet – taking down the $10,000 6-Max Championship Event #32 for $670,041. 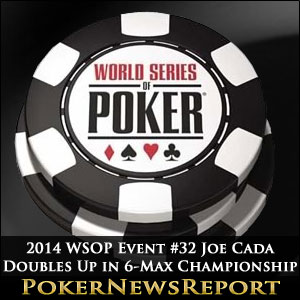 Joe Cada became only the second WSOP Main Event winner to subsequently win another bracelet – taking down the $10,000 6-Max Championship Event #32 for $670,041.

Event #32 of the 2014 WSOP – the $10,000 buy-in 6-Max NL Hold´em Championship – attracted a small but quality field of 264 entries. Players such as Daniel Negreanu, Jason Mercier, Ryan Riess, Justin Bonomo, Davidi Kitai, Michael Mizrachi, and Joseph Cheong all took a shot at winning this prestigious tournament, but all failed to make it into the money.

The 30-player bubble burst midway through Day 2, when Scott Clements (A♦ K♣) rivered the K♠ to bust former Main Event Champion Greg Merson (Q♣ Q♥), and the field was whittled down to the final thirteen players by the start of Day 3. The six-handed final table was set when Dario Sammartino Turned a set of Tens to best Martin Jacobson´s flopped pair of Aces, by which Tim Joe Cada had risen to the top of the leaderboard.

Ausmus Shoots from Last to First

The final table got underway just at the start of Level 25 (blinds 15,000/30,000 – ante 5,000) with Jeremy Ausmus almost immediately doubling up against Joe Cada 9♥ 9♦ > A♠ 9♠. Ausmus then eliminated Dario Sammartino in sixth place Q♦ Q♣ > J♣ J♦ before chipping up at the expense of Max Silver to be the first player to hit 3 million chips.

Max Silver recovered some of his chips when busting Erick Lindgren in fifth place K♥ 4♦ > 10♦ 9♥, but lost a substantial chunk of his chip stack to Joe Cada A♠ K♥ > Q♦ 8♠ after both players had hit the flop of 2♦ Q♣ K♣. Max Silver was eventually to finish in third spot – his paired 10♣ 6♥ falling to Joe Cada´s trip Eights – one hand after Jeremy Ausmus had eliminated JC Tran in fourth place J♠ J♦ > A♣ Q♥.

Jeremy Ausmus took a 4,880,000 -v- 3,060,000 chip advantage into the heads-up against Joe Cada, and throughout the next level the two players played relatively small-ball poker – Ausmus winning the only hand that went to showdown with King-high after Cada had made only slight inroads into Ausmus´ superior stack.

The final hand came in the forty-third hand of heads-up play – Joe Cada showing aggression for the first time in ages, and Jeremy Ausmus responding by shoving all-in. Cada made the call and the cards were on their backs:

The flop of 5♠ 2♠ 4♥ gave Ausmus the chance of a backdoor flush, but the board was not to be so obliging, and completed 7♠ and 6♥ to eliminate Ausmus – who has final tabled WSOP events in Las Vegas, Europe, Australia and New Orleans – and to make Joe Cada the second player to win a WSOP bracelet subsequent to Main Event victory after Carlos Mortensen.