Brett Shaffer kept clear of his opponent´s aggression and tripped over Deuces in the final hand to win Event #31 of the 2014 WSOP and his second WSOP bracelet. 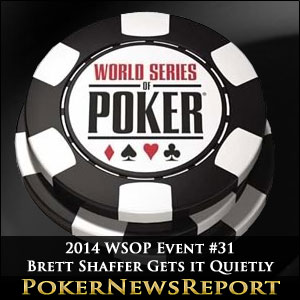 Brett Shaffer kept clear of his opponent´s aggression and tripped over Deuces in the final hand to win Event #31 of the 2014 WSOP and his second WSOP bracelet.

Event #31 of the 2014 WSOP was one of two “low” buy-in NL Hold´em tournaments to start over the weekend, and it attracted 1,631 players to create a prize pool of $2,201,850. The 171-player bubble burst early on Day 2, after which the traditional rush to the Cashier´s desk ensued and only fifteen players survived into Day 3.

The final table was set when RJ Sullivan spiked an Ace on the River to eliminate Steven McNally in tenth place A♥ K♣ > K♦ K♠, eliminating Sullivan into a narrow lead as the nine remaining players took their seats in the Rio´s Amazon Room.

With blinds just about to increase to 15,000/30,000 (ante 5,000) when the final table got underway, there was no shortage of action early on. Jason Vanstrom bust in the third hand of the final table when his A♦ Q♠ failed to improve past Matt Stout´s J♣ J♠ and Jim Jacobsen left the final table two orbits of the button later when his A♠ K♦ failed to connect with the board to best Peter Gould´s 10♦ 10♥.

Rob Wazwaz was crippled in a hand against Brett Shaffer in which Shaffer´s A♦ Q♦ out-kicked Wazwaz´ Q♠ J♥ on a Queen-high board, and Wazwaz was eliminated in the following hand when RJ Sullivan (A♥ 8♠) paired his Ace on the flop to best Wazwaz´ pocket Sixes. Just a few hands later and Robert Schmidt was sent to the rail in sixth place – getting the last of his chips all-in with A♠ 10♦, but also failing to connect with the board to be bust by Brett Shaffer´s 3♦ 3♠.

Just before the dinner break there was time for Aleksandr Gofman to run his 10♥ 10♣ into Peter Gould´s A♥ A♠, and as the four remaining players stopped the game for something to eat, their relative chip stacks looked like this:

Shaffer had taken a substantial chip lead following the elimination of Peter Gould, and largely stayed out of trouble as Matt Stout and RJ Sullivan went to war on each other. Sullivan eventually won that particular battle – busting Matt Stout in third place K♣ Q♣ > A♠ 9♠} – but it was Brett Shaffer who took a 4,105,000 -v- 3,240,000 chip advantage into the heads-up.

The early exchanges of the heads-up climax to Event #31 of the 2014 WSOP were fairly subdued. Brett Shaffer was allowed several walks in the big blind, while RJ Sullivan took down a couple of pots with some pre-flop four-betting. The concluding hand came out of the blue and had a surprising result.

Brett Shaffer had just taken 1.5 million chips from Sullivan with a rivered straight and announced in the very next hand that he was all-in. RJ Sullivan made the call and the cards were on their backs.

The flop of 5♦ 2♣ 9♥ was not a disaster for Sullivan as any Three or Four would put him back ahead in the hand. The 6♣ on the Turn helped neither player, but the 2♥ on the River sealed the tournament for Brett Shaffer and gave him his second WSOP bracelet after winning a similar event last year.