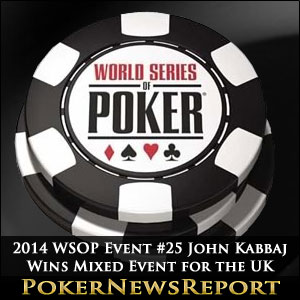 After two days of ten levels, 18 players returned to battle it out for the bracelet and $267,327 first prize; and the eight-handed final table was set when Joe Tehan eliminated Tyson Marks in ninth place – crushing Eric Seidel in the process – and took the chip lead in the event.

Tom Schneider was the first player to leave the final table, having had his chip stack reduced to 72,000 chips by Terrence Hastoo before Erik Seidel took the last of them with a Turned straight in a hand of Omaha 08. Mike Leah quickly followed him to the rail in seventh place – John Kabbaj´s trip Threes improving to a Full House on the Turn, and Eric Seidel´s tournament life was extinguished in the following round of Stud Hi/Lo when his early pair of Sevens could not improved past Thomas Keller´s two pairs of Aces and Tens.

As play progressed, Thomas Keller and John Kabbaj were leading from the front – Keller busting Joe Tehan with the nut flush and nut low hand in a hand of Omaha 08, and Kabbaj eliminating Terrence Hastoo in fourth place after Hastoo had moved all-in in a hand of Omaha 08 with a healthy looking A♥ 2♥ 4♠ 5♣. Christopher McHugh was bust in third place when his two pairs were not good enough to best Kabbaj´s rivered Full House, and it was John Kabbaj who led into the heads-up with a 2,415,000 -v- 1,115,000 chip advantage over Thomas Keller.

It took John Kabbaj a little over twenty minutes to wrap up the bracelet in Event #25 of the 2014 WSOP, with all three significant hands coming at Stud Hi/Lo. In the first Keller missed his flush draw to gift a substantial pot to Kabbaj (who had two pairs), and in the second Kabbaj crippled Keller with just a pair of Kings.

In the final hand, John Kabbaj bet every street until Thomas Keller was all in by fifth:

Thomas Keller´s lead in the hand with a lowly pair of Threes lasted just one more card, as John Kabbaj caught the 7♣ on sixth street to make a better pair. Keller´s hand concluded with the 5♠ and 8♣ to give John Kabbaj victory in the mixed Omaha 08/7 Card Stud Hi/Lo Event #25 of the 2014 WSOP.