Kevin Eyster completed his dominance of Event #24 of the 2014 WSOP by quickly wrapping up victory against opponent Pierre Neuville on Day 4 of the tournament. 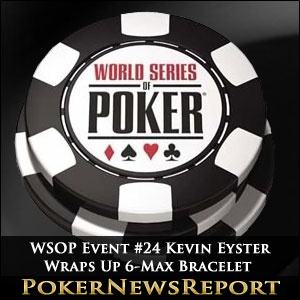 Kevin Eyster completed his dominance of Event #24 of the 2014 WSOP by quickly wrapping up victory against opponent Pierre Neuville on Day 4 of the tournament.

Seventeen players survived the carnage that occurred in the last four Levels of Day 2, and after five levels of play on Day 3 the final table of 6 was set when Kevin Eyster eliminated Mustapha Kanit A♠ 6♠ > J♠ 4♠ (on a two-spade flop) to take a commanding chip advantage into the climax of the tournament.

Neuville Goes from Last to First in 33 Hands

After a few hands of small-ball poker, the game moved into Level 26 (blinds 15,000/30,000 – ante 5,000) and the final table action started for real. Pierre Neuville spiked a Queen on the River to double up against Andrew Lichtenberger A♣ Q♥ > 7♣ 7♠, took down a big pot against Kevin Eyster with pocket Fives, an even bigger one against Jeremy Kottler with A♦ A♠, and moved into the chip lead when spiking another Queen with A♠ Q♦ to win a 810,000 chip pot from Eyster.

David Borrat was the first player to depart the final table – running his K♣ 10♠ into Jeremy Kottler´s Q♦ Q♣ and failing to find the King he needed to avoid being eliminated in sixth place; but, a few hands later, pocket Queens proved to be Kottler´s downfall – being put all-in by Andrew Lichtenberger (A♣ 10♦ -v- Q♦ Q♥) and Lichtenberger pairing his Ace on the Turn to bust Kottler in fifth place.

When play went four handed, Bryn Kenney was the chip leader – having earlier doubled-up against Pierre Neuville A♦ A♣ > 10♠ 6♠ on a Ten-high board – but his position at the top of the leaderboard was only temporary, and his chip stack started to go into freefall after Kevin Eyster had check-shoved into Kenney´s 340,000 post-flop raise and forced a big fold. Neuville joined Eyster at the top of the leaderboard when pairing his A♠ 7♦ to double up against Eyster, and thereafter the two chip leaders started to draw away.

Bryn Kenney lost the last of his chips to Pierre Neuville A♥ 9♦ > A♦ 5♣ to finish in fourth place, while Andrew Lichtenberger was reduced to eight big blinds by the time he found himself facing a post-River shove from Kevin Eyster with just Ace-high. Lichtenberger made the call, and was eliminated from Event #24 of the 2014 WSOP in third place when Eyster rolled over a pair of Queens.

Going into the climax of the tournament, Pierre Neuville held a 4,720,000 -v- 3,400,000 chip lead over Kevin Eyster, and initially he started to extend his advantage. An Eight-high straight for Eyster brought the chip counts level again and then it was Eyster´s turn to move into a clear chip lead as the Day 3 approached the end of its allotted ten levels.

The two players had the option of playing on for another level, but Pierre Neuville declined, preferring to get a night´s rest – a decision which clearly frustrated Kevin Eyster, who was on a roll and winning practically every pot. However, the rules are the rules, and the two players re-convened the following morning, with blinds of 50,000/100,000 (ante 10,000), and Kevin Eyster having a 5,515,000 -v- 2,605,000 over his Belgian opponent.

The overnight rest failed to improve Pierre Neuville´s fortunes, and Kevin Eyster continued to chip away at Neuville´s chip stack throughout the early exchanges. A series of pre-flop shoves and post-flop three-bets reduced the Belgian to little more than one million chips without any hands going to a showdown; and when Kevin Eyster shoved once again with K♣ 9♣, Neuville made the call with K♠ Q♥.

Neuville´s lead in the hand only lasted as long as it took to deal the flop of K♦ 9♥ 3♣ – giving Eyster two pairs. Eyster´s hand improved to a Full House on the Turn (9♦), and all Neuville could hope for was the K♠ on the River for a chopped pot. Fortunately for Eyster the A♠ was dealt and he had added victory in Event #24 of the 2014 WSOP to his recent 6-Max WSOPC ring and FTOPS 6-Max trophy.