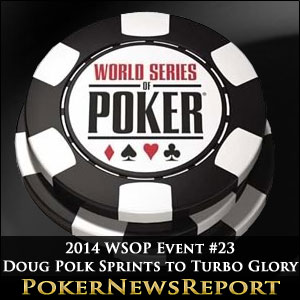 There was a popular winner of the Turbo NL Hold´em Event, when Doug Polk – better known on Full Tilt Poker as nosebleed stakes player “WCGRider” – tore through the final table of the $1,000 buy-in Turbo event to won his first WSOP bracelet.

Doug Polk had gone into the nine-handed final table with a narrow chip advantage over Andy Philachack and UK poker player Liam Alcock, and it was ultimately Polk and Philachack who were to battle out the heads-up for the first Turbo bracelet of the 2014 WSOP.

With blinds of 10,000/20,000 (ante 4,000) more than half the players had less than 20 Big Blinds to play with when play resumed, and consequently the start of the final table was brutal. Within the first thirty minute level, four players were sent to the rail:

After half an hour of carnage, the pace of eliminations slowed somewhat during the second level. Jonathan Hanner doubled up at the expense of Liam Alcock; and Alcock was subsequently bust in fifth place when Polk (A♣ K♣) spiked the Q♣ to complete his Ace-high straight, after Adcock (J♠ J♦) had flopped a set of Jacks.

Polk then opened up a sizeable advantage over his three opponents when flopping a Full House to cripple Jonathan Hanner; although it was Chad Cox who was the next player to be eliminated from Event #23 of the 2014 WSOP after he moved all-in with A♥ 8♦ and Doug Polk (Q♠ J♠) paired his Jack on the River to send Cox to the rail in fourth place.

Jonathan Hanner made a remarkable recovery during three-handed played – winning five of the six hands after Cox´s elimination, including a rivered Broadway straight against Andy Philachack, and an Ace-high Flush against Doug Polk, to work his way back into contention. Hanner took down a series of pots with post-flop aggression, and relieved Doug Polk of 275,000 chips with a pre-flop shove to move into the chip lead at the beginning of Level 27 (blinds 25,000/50,000 – ante 5,000).

However, Hanner´s demise was just as quick as his ascendancy to the top of the leaderboard and after Doug Polk had taken three streets of value with a pair of Sevens, Andy Philachack took Hanner for another 600,000 chips (A♣ 7♣ > J♦ J♣) and then eliminated Hanner in third place Q♦ 10♦ > A♠ 3♠ with a rivered Flush. However, despite Philachack´s dismantling of Hanner´s chip stack, it was Doug Polk who took a 2,400,000 -v- 2,000,000 chip advantage into the heads-up.

The heads-up conclusion to the 2014 WSOP Event #23 Turbo NL Hold´em took just nineteen hands, during which time everything went in Doug Polk´s favour. Only two hands went to showdown during the early exchanges – Polk taking them both with a rivered pair of Tens and a Turned pair of Queens.

The final hand saw Andy Philachack move all-in on the board of 10♠ 8♦ 3♦ / 3♦ / J♠ with 5♥ 3♥ for Trip Threes. Doug Polk quickly called and revealed 9♥ 7♦ for a rivered Jack-high straight. Polk took the hand, eliminating Philachack in second place, and collecting his first WSOP bracelet along with the $251,969 first prize.