A quite sensational finish to Event #21 of the 2014 WSOP saw Dominic Nitsche avoid elimination four times during the heads-up to win his second WSOP bracelet. 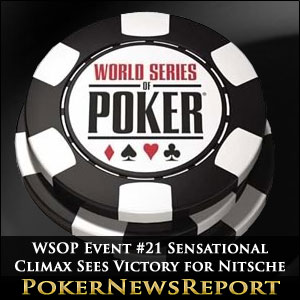 A quite sensational finish to Event #21 of the 2014 WSOP saw Dominic Nitsche avoid elimination four times during the heads-up to win his second WSOP bracelet.

As far as many people were concerned, Event #21 of the 2014 WSOP was “just another” $1,000 NLHE Donkament, but it turned out to provide one of the most exciting climaxes to a tournament so far in this year´s World Series of Poker.

The nine-handed final table was set in less than two hours, with Thayer Rasmussen having the chip advantage after busting Lance Harris in tenth place A♠ J♦ > 10♣ 10♦, and with some notable players included in the final line-up:

Practically all of the early action was dominated by the presence of Aces – David Burt being eliminated in the third hand of the final table when running his Q♠ J♠ into Jeff Goss´ A♦ A♣, and Billy Horan being bust in eighth place in the cruellest fashion when his A♥ A♦ were cracked by Dave D´Alesandro´s A♣ A♠ on the board of J♠ 7♠ 2♣ / 4♠ / 5♠.

Bob Bounahra took the early chip lead in an incredible hand against Thayer Rasmussen in which Rasmussen (A♣ Q♣) had caught the Q♦ on the Turn before Bounahra (A♦ K♠) spiked the K♦ on the River to stay alive in the tournament. Eric Milas then also suffered an unfortunate departure in seventh place – spiking the A♣ on the River to pair up his A♦ Q♥, but finding that it also completed Dave D´Alesandro´s club Flush.

The flurry of early action failed to subside as the game went into its fourth level of the day. Dominik Nitsche eliminated Jeff Gross in sixth place Q♣ Q♦ > A♠ K♣ to take over at the top of the leaderboard before Dave D´Alesandro flopped a set of Kings against Nitsche´s pocket Nines to become the new chip leader. Bob Bounahra doubled-up against D´Alesandro A♣ K♠ > A♠ 6♠ to knock D´Alesandro down into third place before Dominik Nitsche took over once again when busting Thayer Rasmussen in fifth place 10♦ 10♠ > A♥ K♥.

Four-handed play was over quickly when Dominik Nitsche flopped a pair of Queens to send Zachary Gruneberg (A♥ J♠) to the rail in fourth place, but Bob Bounahra was not going to let Nitsche run away with the tournament, and he tripled up against both Nitsche and D´Alesandro when his Q♦ 2♠ paired on the flop of Q♠ 10♥ 7♠, and his Queens held to keep the 2011 November Niner in contention.

The tournament looked as if it was heading for a quick conclusion when Dominik Nitsche shoved all-in with 9♥ 10♥ against Dave D´Alesandro´s A♣ Q♥, but Nitsche spiked the 10♣ on the River to double-up into the chip lead. D´Alesandro then flopped a Full House and got three streets of value to cripple Nitsche, but the German bounced straight back and doubled-up into the chip lead once again A♥ 2♠ > 10♣ 9♥.

Dave D´Alesandro battled back into the chip lead with a flopped pair of Eights and victory in six out of seven pre-flop pots; but incredibly Dominik Nitsche doubled-up once again A♠ 6♠ > Q♠ 10♦ to level the chip counts and avoid potential elimination for the third time. Dave D´Alesandro moved ahead once again when forcing Nitsche off of an 820,000 chip pot, but all the flips were going Nitsche´s way and, when the two players got their chips in the middle once again, Nitsche survived elimination for the fourth time when his A♣ 9♥ rivered a heart flush against D´Alesandro´s 4♠ 4♦ – which had been ahead until the River.

Dominik Nitsche´s fourth double-up in the heads-up had crippled Dave D´Alesandro, and it was not long until the last of his chips were in the middle of the table – the first time he had been at risk throughout the heads-up climax to Event #21 of the 2014 WSOP. Dominik Nitsche called and the cards were on their backs:

The flop of K♠ 6♣ Q♥ hit both players – but Nitsche was still ahead in the hand with his two pairs. The A♣ on the Turn failed to improve either hand, and the tournament was over when the A♦ was dealt on the River – Dominik Nitsche adding victory in Event #21 of the 2014 WSOP to his victory in a similar $1,000 buy-in “Donkament” in 2012.