Kory Kilpatrick overcame a stacked final table to shoot his way to victory in the climax of 2014 WSOP Event #20 – the 3 Day $3,000 buy-in Shootout Event. 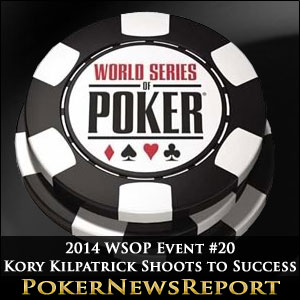 Kory Kilpatrick overcame a stacked final table to shoot his way to victory in the climax of 2014 WSOP Event #20 – the 3 Day $3,000 buy-in Shootout Event.

The second Shootout event of the 2014 World Series poker saw 389 players pony up the $3,000 buy-in to compete in a one-table Sit n Go Shootout. The winner of each table progressed into Sunday´s 4-Max Shootout, which left ten finalists in with a chance of winning the coveted WSOP bracelet.

Because some of the forty Day 1 Sit n Gos were played nine-handed and others were played ten-handed, there was a slight imbalance in the chip counts when the final table got underway, but ultimately this was to have no impact on who eventually won the 2014 WSOP Shootout bracelet.

With the blinds reset to 3,000/6,000 (ante 1,000) when play got underway, there was a very slow start to proceedings. Chris Bell moved into an early lead after forcing everybody out of a valuable pot in which six players had limped in pre-flop, and Phil Galfond maintained his position in second place when rivering an Ace-high flush against Noah Bronstein.

Narendra Banwari was the first player to depart after falling to the bottom of the leaderboard – moving all-in with 7♠ 7♦ against Jack Duong´s A♦ J♦ and seeing the A♠ spike on the Turn, but it was not until hand #140 of the final table that a second player was to bust – Eric Wasserson (A♦ Q♣) flopping a pair of Aces to eliminate Dylan Linde (K♣ K♦) in ninth place.

After six levels of play the action started to pick up pace. Michael Stonehill moved all-in with A♠ J♦ but failed to connect with the board to improve past Jack Duong´s 2♠ 2♥ and was eliminated in eighth place, while Kory Kilpatrick survived an anxious few minutes when all-in with 4♦ 4♣ against Duong´s A♥ Q♥, but Duong missed all his outs to double up Kilpatrick.

Noah Bronstein sent Taylor Paur to the rail in seventh place when his J♣ J♠ held against Paur´s 8♥ 8♦, and another double bracelet seeker – Phil Galfond – was soon to follow after moving all-in with A♠ 4♠ against Jack Duong (A♣ J♣), and Duong pairing his Jack on the Turn eliminate Galfond in sixth place.

As play went five-handed, a sequence of double ups and one triple up saw the dynamics of the final table change. Kory Kilpatrick started the sequence by doubling up against Eric Wasserson J♥ J♦ > A♣ K♣, but Wasserson doubled back a few hands later with 7♦ 4♦ (for trip Fours) > Kilpatrick´s Q♦ 9♥ (for top pair).

Noah Bronstein (A♠ A♦) got a valuable triple up against Eric Wasserson (10♥ 10♠) and Chris Bell (A♣ K♠), but then Wasserson crippled Bell when doubling-up A♥ J♣ > A♠ K♣ – before eliminating the former chip leader somewhat ironically with A♠ K♣ (the opening hand Bell had just lost two flips with) > Bell´s A♦ Q♣.

The conclusion to the Shootout Event of the 2014 WSOP happened comparatively quickly to the pedestrian pace of the preceding action. Jack Duong was unlucky to be eliminated in fourth place when, on a board of A♥ J♣ 10♠ / 8♥ / J♦, his Q♦ 9♦ improved to a straight, but was no match for Kory Kilpatrick´s (A♦ A♠) rivered Full House, and Kilpatrick (A♥ 8♦) also enjoyed a small degree of luck to pair his Eight on the Turn in the hand which lead to the elimination of Noah Bronstein (5♦ 5♣) in third place.

With the two eliminations of Duong and Bronstein, Kory Kilpatrick took a 2,308,000 -v- 1,143,000 chip advantage into the heads-up against Eric Wasserson, and looked like he was going to make short work of his opponent when hitting a runner-runner flush with 6♣ 2♣ to reduce Wasserson to just 6 Big Blinds, but Wasserson returned the favour with his own runner-runner club flush to double back into contention.

Kory Kilpatrick was again the fortunate recipient of a backdoor flush to apply the pressure to Eric Wasserson, and Wasserson eventually shoved the last of his chips into the middle with J♦ 10♦. Kilpatrick had an easy call to make with A♥ J♠ and the two players saw out the flop and Turn of 4♦ 7♥ 7♠ / 5♣ before Wasserson started to rise from his chair and make preparations to leave the final table.

Kilpatrick suggested he should wait at least until the final card was dealt, but the 9♥ was of no value to Eric Wasserson, and Kory Kilpatrick had won the $3,000 buy-in NLHE Shootout for $254,891.