Ted Gillis played a solid game of poker to take down Event #19 of the 2014 WSOP – defeating dual bracelet winner John Hennigan heads-up for the $514,027 prize. 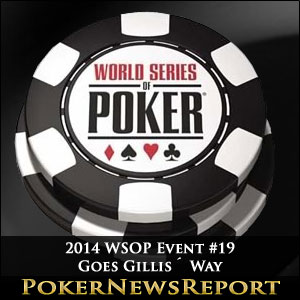 Ted Gillis played a solid game of poker to take down Event #19 of the 2014 WSOP – defeating dual bracelet winner John Hennigan heads-up for the $514,027 prize.

Event #19 of the 2014 World Series of Poker was another colossal tournament. 2,086 players ponied up the $1,500 buy-in to create a prize pool in excess of $2.8 million which was shared between the top 216 players following the elimination of Paul Phillips early on Sunday morning A♣ K♦ < Dylan Thomassie´s A♥ A♠.

Twelve players returned for yesterday´s Day 3, and the official nine-handed final table was set when Ted Gillis spiked the J♥ to complete a Broadway straight and eliminate the unfortunate Darin Stout in tenth place A♣ 10♦ > A♠ K♥.

There was an eventful start to the final table of 2014 WSOP Event #19, when – in the seventh hand – Dylan Thomassie moved all-in with 9♥ 10♥ and received calls from both Edison Shields (A♥ A♠) and Dejan Divkovic (K♣ K♦). The flop of K♥ 6♦ Q♥ put Divkovic ahead in the hand, but gave Thomassie and Shields outs to a flush draw.

The K♠ was dealt on the Turn to give Divkovic Quad Kings, and despite the 2♥ completing Dylan Thomassie´s flush on the River, he was eliminated in ninth place, with Shields – by virtue of having the bigger chip stack when the hand started – bust in eighth place.

Divkovic on a Roll as Former Leaders Fall

Following the dual elimination of Dylan Thomassie and Edison Shields, Dejan Divkovic went on a roll – rivering an Ace-high flush to bust end-of-Day-2 chip leader Hiren Patel in seventh place A♥ Q♥ > 6♣ 6♠ and Mustapha Kanit in sixth place A♣ 10♦ > A♦ 3♣ after John Hennigan had crippled the former chip leader.

Jaime Kaplan was eliminated in seventh place when his 3♠ 3♦ fell to Jacobo Fernandez´ rivered straight, and Ted Gillis narrowly avoided being sent to the rail soon after when his 9♥ 10♥ spiked Trip Tens on the River to best Fernandez´ paired K♦ Q♦. Gillis then took chips from both Divkovic and Fernandez, so that when the four remaining players returned from the dinner break at the beginning of Level 28 (blinds 30,000/60,000 – ante 10,000), the respective chip counts looked like this:

Divkovic was left perilously short after doubling up Ted Gillis A♣ J♥ > 7♦ 7♣, and it was Gillis who took a 5.6 million -v- 3.8 million chip advantage into the heads-up against John Hennigan after eliminating Dejan Divkovic in third place A♠ Q♥ > A♥ 6♦}.

The first dozen hands of the heads-up were fairly tense, with relative newcomer Ted Gillis testing the water against dual bracelet winner John Hennigan. In the twentieth hand of the heads-up encounter, Ted Gillis made a substantial dent in John Hennigan´s chip stack when his 4♦ 4♥ improved to a Full House, and the tournament was decided ten hands later.

In the final hand, John Hennigan moved all-in with Q♣ 9♥. Ted Gillis had no hesitation in making the call with A♠ 6♥ and the cards were on their backs. The flop of 10♣ 10♥ A♥ put Gillis way ahead in the hand, although Hennigan´s hopes of a backdoor flush improved when the 7♥ was dealt on the Turn. Unfortunately for Hennigan, there was to be no miraculous comeback, and the K♠ on the River sealed Ted Gillis´ victory in the 2014 WSOP Event #19.