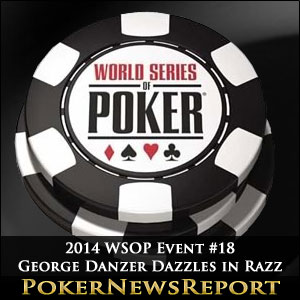 It has been a fairly miserable start to the 2014 World Series of Poker for Europe´s poker players, but things started to look up towards the end of last week. Dimitar Danchev and Richard Ashby both came close to winning gold in Event #6 and Event #10 respectively, Davidi Kitai picked up a bracelet in Event #15 on Sunday afternoon and, a few hours later, George Danzer doubled Europe´s bracelet haul with victory in the $10,000 buy-in Razz Event#18.

However, it could have been a disaster day for Danzer – who came to the final table well stacked, but who slipped down the leaderboard quickly. Only two double-ups – with the winning cards arriving on seventh street each time – prevented Danzer suffering an early exit, and he almost failed to finish off his heads-up opponent Brandon Shack-Harris despite at one point having a 17:1 chip advantage.

112 players had ponied up the $10,000 buy-in for the 2014 WSOP Razz Event #18, and the money bubble burst on Saturday evening when Jesse Martin was bust in seventeenth place by Brian Hastings. Twelve players returned on Sunday to compete for the bracelet, headed by David Bach with Daniel Negreanu sitting in a comfortable third place.

Negreanu had a nightmare in pursuit of his seventh WSOP bracelet, and was crippled by Todd Dakake´s “perfect Seven” soon after play got underway – eventually being bust in tenth place by Event #3 winner Brandon Shack-Harris. David Bach also had a poor start, and doubled up Yuval Bronshtein to be closer to the foot of the leaderboard than the top when the eight-handed final table got underway.

All Change as Bach and Kihara Hit the Rail

Within an hour of the final table getting underway, the order of the leaderboard bore no relation to what it had been when the eight players first took their seats. Todd Dakake doubled-up against both David Bach and Brian Hastings to move into second place behind Brandon Shack-Harris, who had eliminated David Bach in eighth place Seven-low > Nine-low, and Naoya Kihara in seventh place Seven-Six-Four low > Seven-Six-Five low to chip up beyond one million chips.

George Danzer had stumbled down to the foot of the chip counts due to folding his cards in the later streets of multi-way hands and, as the game became six-handed, was reduced to just 55,000 chips (less than 1½ big bets). A fortunate double-up with Eight-Seven-Four low against Todd Dakake´s Eight-Seven-Six low when Danzer spiked the Eight on Seventh Street kept the German in the game until the beginning of Level 20 (bets 30,000/60,000 – ante 7,000).

Danzer then hit a fortunate Seven to complete a Nine-low against Yuval Bronshtein´s Ten-low and double up once more, won a massive three-way pot with a Six-low to eliminate Todd Dakake in sixth place and cripple Brian Hastings, and then was the fortunate benefactor of Brandon Shack-Harris bad luck when Shack-Harris started off with A♣ 4♦ / 5♣ 2♦ and finished with A♦ A♠ / K♠.

Brandon Shack-Harris maintained his advantage at the top of the leaderboard when busting Brian Hastings in fifth place Six-Five-Three-low > Six-Five-Four-low, but George Danzer went off in pursuit of the chip leader – forcing Yuval Bronshtein out of a pot after Bronshtein had committed as far as sixth street, before Shack-Harris mopped up the last of the Israeli´s chips with a Six-low against Bronshtein´s Seven-low.

Todd Barlow had done amazingly well to still be involved by the time the game went three-handed, but coming back from the dinner break, he had just 300,000 chips remaining as the bets increased to 50,000/100,000 (ante 10,000). Barlow managed to survive all-in confrontations on six separate occasions (five of them against George Danzer), but eventually his luck ran out – hitting pairs all over the place to finish with a best hand of a pair of Kings against Brandon Shack-Harris´ pair of Nines.

The elimination of Todd Barlow in third place enabled Brandon Shack Harris to take a 1,850,000 -v- 1,510,000 chip advantage into the heads-up (slightly more than one big bet), but he quickly put space between himself and Danzer – besting Danzer´s Nine-low with an Eight-low after Danzer had led the betting after every street.

Danzer Battles Back to Win – Eventually

With blinds now increasing to 60,000/120,000 (ante 15,000), it did not take a lot of early betting for players to think seriously about whether they should hang on in a hand; and George Danzer twice forced Brandon Shack-Harris out of substantial pots on fifth street to move into the chip lead.

The one time Shack-Harris did stand up to Danzer´s aggression, his Nine-low was bested by Danzer´s rivered Eight-low, and it was the American´s turn to be reduced to just 1½ big bets (Danzer 3,180,000 chips – Shack-Harris 180,000 chips).

Incredibly Brandon Shack-Harris doubled-up three times in a row – and was favourite to achieve a fourth double up when moving all-in with Q♦ 2♦ / 7♥ 3♥ 10♠ 6♠ against George Danzer´s 6♣ 2♠ / K♥ J♣ 5♣ 4♥. However, whereas George Danzer spiked the A♥ on seventh street to give him a Six-low, Shack-Harris was dealt the Q♠ to pair his hand, present the title of Event #18 Razz Champion to Danzer and improve Europe´s weekend in the 2014 WSOP.