Dan Heimiller recovered from an early setback at the final table of the Senior´s event to collect his first WSOP bracelet and the record-breaking $627,462 prize. 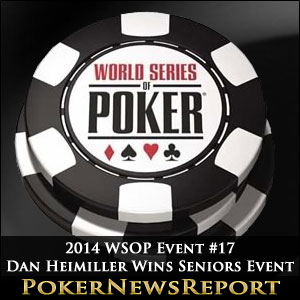 Dan Heimiller recovered from an early setback at the final table of the Senior´s event to collect his first WSOP bracelet and the record-breaking $627,462 prize

Records continued to fall in Event #17 of the 2014 World Series of Poker, as 4,425 golden oldies ponied up the $1,000 buy-in to compete in the Seniors tournament for players aged 50 or over. The 468-player money bubble burst within the first few hands of Day 2 when Kevin Detienne spiked a Full House to deny Stanley Statkiewicz a place in the prize money, and thereafter players started to fall at an alarming rate.

On Sunday morning, just thirty-two players returned to play out the conclusion of the tournament, and the final table was set after seven levels of play when Dan Heimiller (A♠ 9♠) flopped two pairs to eliminate Michael Frederick (3♦ 3♥) in tenth place and take a massive chip advantage over his opponents.

Dan Heimiller´s victory in Event #17 of the 2014 WSOP was not as straightforward as he would have liked, and his final table started badly when he doubled up Donald Maas J♥ J♣ > A♥ Q♦ in the sixth hand of play, and then Dennis Phillips 5♥ 5♣ > A♦ Q♦ one orbit of the button later.

Jim Custer departed quickly in ninth place when his A♥ 6♥ failed to improve past David Smith´s A♣ K♣, and Custer was soon joined on the rail by David Vida (K♣ Q♦ < Donald Maas´ A♥ K♠) and Doc Barry – who had doubled up Anthony Wise K♠ Q♥ > A♥ Q♣, before getting his last couple of blinds in with Q♠ 10♥, and coming second to Dan Heimiller´s K♣ J♦.

Heimiller hung around long enough to have his photo taken, and then immediately jumped into the $10,000 HORSE Event (#22), where he finished the day with a below-average 16,200 after being blinded down since late registration closed.