Todd Bui recovered from being the shortest-stacked player during three-handed play to win the $1,500 buy-in 2-7 Triple Draw Lowball Event – #16 of the 2014 WSOP 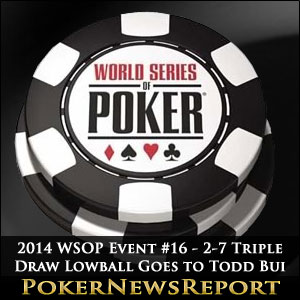 Todd Bui recovered from being the shortest-stacked player during three-handed play to win the $1,500 buy-in 2-7 Triple Draw Lowball Event – #16 of the 2014 WSOP

Having the opportunity to exchange cards three times in 2-7 Triple Draw Lowball leads to players getting closely matched hands. With a round of betting between each exchange of cards, this can also lead to some valuable pots building up quickly, and consequently the final table of Event #16 of the 2014 WSOP was wrapped up in a little over three levels.

The day had started with eight players still in contention for the $124,510 first prize and the fifteenth bracelet of the 2014 World Series of Poker, but after Ismael Bojang and Kevin Iacofano had both been eliminated by Todd Bui, the six remaining players congregated around the official final table.

Shchemelev Starts Well, But One of Three to Fall Quickly

Vladimir Shchemelev got off to the best possible start to the final table – winning both the two hands that remained in Level 21 (blinds 10,000/20,000) to chip up to 200,000 chips and reduce David Gee to being the shortest stacked player. Gee found himself all-in soon after in a three-way pot against Tom Franklin and Todd Bui, and was sent to the rail in sixth place when Bui turned over a “Number Three” – 7x 6x 5x 3x 2x – the third best hand a player can have in 2-7 Lowball.

Bui Bounces Back from Brink to Claim Victory

Despite having knocked out three players, Todd Bui was the shortest stacked of the three remaining players when the tournament went three-handed; having 240,000 chips as opposed to David Bell´s chip stack of 700,000 chips and Tom Franklin´s stack of 520,000 chips. With blinds now increasing to 20,000/40,000, Bui was reduced to having just six bets available to him, but he was able to use them wisely to triple up at the expense of his two opponents and take the chip lead.

The last of Tom Franklin´s chips went in on the second round of betting after he had been dealt 8x 6x 5x 3x with one card to exchange. Todd Bui stood pat with 10x 8x 5x 4x 2x, and Franklin only had to hit a non-pairing card with a value of Nine or less to double up. Unfortunately for Tom Franklin, a Five was dealt as his last card, pairing his hand and giving victory to Todd Bui in Event #16 of the 2014 World Series of Poker.