Davidi Kitai and Gordon Vayo needed a fourth day to decide the $3,000 buy-in 6-Max bracelet, with Kitai eventually triumphing in Event #15 of the 2014 WSOP. 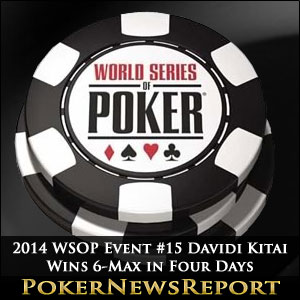 Davidi Kitai and Gordon Vayo needed a fourth day to decide the $3,000 buy-in 6-Max bracelet, with Kitai eventually triumphing in Event #15 of the 2014 WSOP.

There was an extended conclusion to Event #15 of the 2014 WSOP, as the two protagonists – who had led the event since the setting of the final table – exchanged the chip lead over almost three levels of heads-up play.

Davidi Kitai had originally gone into the heads-up with a substantial 4:1 chip advantage after busting Tony Ruberto in third place A♠ K♣ > A♦ 6♣, but Gordon Vayo – who had earlier eliminated Phil Hellmuth in eighth place A♦ 7♥ > A♣ 2♠ – battled back to take a narrow chip advantage, courtesy of a massive double up with 6♦ 6♣ > Davidi Kitai´s A♦ K♥.

Very little separated Kitai and Vayo at the end of the scheduled ten levels of play on Saturday night, so they returned to the Rio All Suites Hotel and Casino last night to play out the climax of Event #15 in the 2014 World Series of Poker with Vayo holding a 3,750,000 -v- 3,545,000 chip over the two-times previous WSOP champion.

Kitai Quickly Back in Front

The game resumed at the start of Level 31 with blinds of 50,000/100,000 and a 10,000 chip ante, and Gordon Vayo was immediately on the offensive – betting 325,000 chips on the River to fold Kitai out of a pot. However, Davidi Kitai was finding the cards to win a few small pots of his own, and followed up victory in a 575,000 chip pot with a paired Six to collect another million chips and move into the lead.

Betting was kept to a minimum as the two players contested the next thirty hands – Davidi Kitai edging further and further ahead, and then taking a 2:1 chip advantage when his K♣ 8♥ paired the Eight on the Turn to take another 750,000 chips from his opponent.

Gordon Vayo´s chip stack started to go into freefall, but at the beginning of Level 32 got a lifeline when his A♣ A♠ held against Davidi Kitai´s A♥ 7♠ following the all-heart flop of Q♥ K♥ 2♥. He then took a 1.5 million chip pot when spiking an Ace on the River with A♠ J♠, but Davidi Kitai maintained the pressure in the smaller pots and reduced Vayo back down to one million chips.

Vayo Doubles Again, but Kitai Spikes a King to Win

The game was almost over in the 100th hand of the heads-up, when Gordon Vayo moved all-in with 9♣ 6♣. Davidi Kitai made the call with A♥ J♠ and the cards were on their backs. Vayo moved into the lead in the hand with the flop K♣ 7♥ 6♥ pairing his Six, and the 7♣ on the Turn reduced the number of outs available to Kitai. The 2♦ on the River was a brick, and Gordon Vayo doubled up to 2 million chips, but his tournament life was soon to be extinguished.

Ten hands later and the two players were all-in again – this time Davidi Kitai being the aggressor with A♦ K♥ against Gordon Vayo´s A♠ 5♣. The flop of J♦ Q♠ 6♣ kept Kitai ahead and also gave him outs to an Ace-high straight, while Vayo could only hope for a Five to stay alive. Fortunately for Davidi Kitai, the Turn (7♥) and River (K♠) provided no assistance for his opponent and paired Kitai´s King. Gordon Vayo was bust in second place to give Davidi Kitai his third WSOP bracelet and the $508,640 first prize.