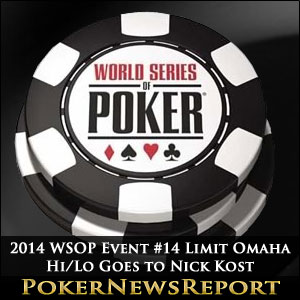 Chicago poker player Nick Kost probably did not feature highly on many people´s Fantasy Poker 2014 WSOP Dream team, with combined lifetime cashes of $15,285 coming into this year´s Series. However, two of his three cashes had centred on Fixed Limit Omaha Hi/Lo, and he used that experience to good effect to win Event #14 of the World Series of Poker.

Even more remarkable about Kost´s victory was that he started the final day of the event with one of the smallest stacks (74,000 chips) of the 26 remaining players (average stack 179,000 chips). Although managing to chip up slowly throughout the early levels, he still had just 193,000 chips in front of him when the final table was set – with last year´s winner of this event Calen McNeil seated immediately to his left.

Nick Kost had the dream start to the final table of the 2014 WSOP Limit Omaha Hi/Lo Event – doubling up against Kai Raichura with nothing more than a pair of Tens, and then taking a massive pot against Alex Luneau when his A♠ 7♥ 5♠ 2♥ rivered an Ace-high flush to best Luneau´s King-high flush. Kost lost a few chips to Calen McNeil when he missed a flush draw, and McNeil took the early chip lead when busting out Konstantin Puchkov A♣ J♠ 6♠ 3♠ > A♠ 10♦ 4♣ 3♠with a rivered Broadway straight.

Thereafter players started to depart quickly. Nick Kost eliminated Adam Coats with an Ace-high flush > Two pairs, and former WSOP Main Event champion Greg Raymer was sent to the rail in seventh place when his A♣ A♥ 3♣ 3♥ managed to win neither the high nor low hand. Steve Chanthabouasy was busted in sixth place when Calen McNeil rivered trip Deuces against Chanthabouasy´s top Two pair, and the field was reduced to four when Jim Bucci hit a runner-runner Flush to end Alex Luneau´s bracelet ambitions.

Nick Kost´s temporary advantage lasted just one hand, as Kal Raichura bust Jim Bucci immediately K♥ 8♦ 5♥ 4♥ > J♦ 6♠ 4♦ 2♠ to take a 3,150,000 -v- 1,500,000 chip advantage into the heads-up. Nick Kost however had the advantage in support from the rail, and when the announcer call for a big cheer for Kal Raichura as the players were announced, nobody responded. “I´m flying solo” announced Raichura.

The heads-up climax of the 2014 WSOP Limit Omaha Hi/Lo Event was one-way traffic. Nick Kost caught a Jack-high straight and low hand to chip up closer to Kal Raichura, and then took a slight advantage after some aggressive post-flop betting saw him take a series of uncontested pots.