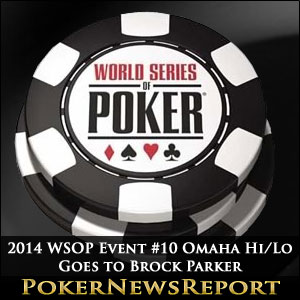 The substantial buy-in for the Limit Omaha Hi/Lo Event might have put a dampener on the number of players who entered the event, but the field was not lacking in quality. By the time Day 3 arrived, seven of the remaining eighteen players already had WSOP victories behind them, and another – Gregory Jamison – had final tabled this event four times before.

Unfortunately for Jamison, 2014 was not going to be his year, as he was bust out of the event in twelfth place by Melissa Burr – Burr being one of two lady players still in with a very good chance of victory when the final table was set.

Little Space to Move with Leader Having 18 Big Bets

The tightly stacked final table got underway a few minutes short of Level 24 with opening bets at 25,000/50,000 (no ante) and with Shirley Rosario leap-frogging Richard Ashby into the chip lead with a better two pairs than Ashby. Dan Kelly paid off Viatcheslav Ortynskiy when Ortynskiy scooped both high and low pots, and then Dan Kelly was the first player to be eliminated from the final table when Shirley Rosario´s A♦ A♣ 5♣ 2♦ hit both the nut Ace-high flush and the nut low hands.

Viatcheslav Ortynskiy took over at the top of the chip counts when his K♦ Q♠ 9♦ 9♣ improved to Quad Queens to cripple Melissa Burr; and Burr was the next player to be busted from the Limit Omaha Hi/Lo Event #10 of the 2014 WSOP when her A♥ 8♥ 8♣ 3♥ missed the board completely to come second to Richard Ashby´s J♦ J♠ 4♠ 3♠ – Ashby moving back up to second place with the elimination of Steve Lustig in seventh place, two pairs > A♣ A♠.

With bets increasing to 40,000/80,000 at the beginning of Level 26, Ortynskiy´s chip stack took a couple of big knocks as both Ofir Mor and Jason McPherson doubled up through the Russian, and Ortynskiy was also the big loser in the hand which saw Brock Parker move up into second place behind Richard Ashby.

Parker had flat-called the three rounds of betting prior to the River in a three-handed pot against Ortynskiy and Shirley Rosario, but once the board of 8♠ Q♥ 5♣ / J♥ / 6♥ had completed, he led out for the maximum 160,000 chips. Both Ortynskiy and Rosario called, but Parker rolled over A♥ J♠ 4♥ 2♦ for both the nut flush and nut low hands.

Thereafter players started to fall with accelerating frequency. Jason McPherson went in sixth when Brock Parker rivered a Six-high straight to scoop both pots, and Shirley Rosario found a pair of Aces and the nut low hand good enough to send Viatcheslav Ortynskiy to the rail in fifth.

Shirley Rosario herself was bust in fourth place when Richard Ashby rivered a flush to beat Rosario´s two pair, but Ashby lost the chip lead to Parker in a Straight > Straight encounter; and even though the Brit eliminated Ofir Mor in third place (Full House > Flush), it was still Brock Parker who held a 2.79 million -v- 2.55 million chip advantage going into the heads-up, with just a few hands left in Level 27 before the opening bets increased to 60,000/120,000.

With such a small margin between the two players, it only took two small pots for Richard Ashby to move back into the chip lead. Ashby then developed a 2:1 chip advantage with trip Aces, before Brock Parker fought back to level the chip counts with trip Eights.

Parker once again moved into the chip lead and ground Richard Ashby down to his last 155,000 chips (less than two big bets), but Ashby doubled up twice in successive hands to plant the seeds of a recovery.

Unfortunately for Ashby the recovery did not last long, and he was put all-in by Brock Parker in the next hand following the flop of 9♥ 8♠ 7♣.

Parker had flopped a Nine-high straight and was the only player in with a chance of taking the low pot. Ashby had the possibility of a Full House following the 9♠ on the Turn, but the River (3♠) was a brick – giving victory and the title of Limit Omaha Hi/lo Champion to Brock Parker.