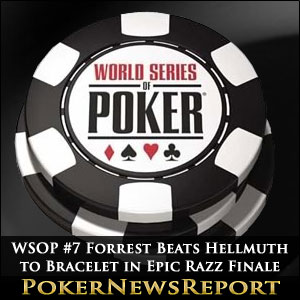 Records were falling all over the place on the final day of the 2014 WSOP Event #7, as Phil Hellmuth acquired his 101st WSOP cash, appeared on his 50th final table, and nearly walked away with his fourteenth WSOP bracelet.

In addition to Hellmuth, the seven other players who formed the final table had ten WSOP bracelets between them, and included the runner up in last year´s Razz event David Bach, and the player who came third when Hellmuth won this event in 2012 – Brandon Cantu.

The action on the final table of the 2014 WSOP Razz Event was instant, with Ted Forrest chipping up nicely against David Bach in the first hand with a 2x 4x 5x 7x 8x low against David Bach, and Kevin Iacofano being eliminated in the third hand by Greg Pappas after pairing both his hole cards on the fifth and sixth streets.

Phil Hellmuth improved the chances of winning his fourteenth WSOP bracelet when crippling Yuebin Guo with a 2x 4x 5x 6x 7x low against Guo´s Eight-low; and then Guo´s final chips went in against Brock Parker – Parker being fortunate to hit a Ten-low which bested Guo´s Queen-low.

Hellmuth and Pappas Start to Run Away

Phil Hellmuth and Greg Pappas continued to use their superior chip stacks to good effect, and were able to force the other players out of valuable pots – as well as finding a little bit of good fortune when it was required.

Brandon Cantu was eliminated in sixth place when any non-pairing card lower than a King would have got him a valuable double-up against Greg Pappas – only for the K♥ arrive on seventh street – and Phil Hellmuth made an Eight-low to cripple Brock Parker after Parker was well ahead in the early streets, but found Kings all the way towards the end of the hand.

Brock Parker was eliminated in fifth place in the next hand, when again starting off with the best selection of low cards, but dealt an ascending value of picture cards as Ted Forrest´s hand improved to an Eight-low.

Pappas Starts to Slump as Hellmuth Gets over a Million

Forrest also managed a virtual double up against Greg Pappas – finding a Nine-low against Pappas´ Ten-low to knock Pappas from the top of the leaderboard – a position taken by Phil Hellmuth, who demolished David Bach´s chip stack on consecutive hands before sending him to the rail with a rivered Eight-high against Bach´s Nine-high.

Hellmuth also took a chunk out of Greg Pappas´ stack with another rivered Eight-low and, as the three players took a break at the end of Level 22 (blinds 12,000/24,000 – ante 3,000), the respective chip stacks looked like this:

Hellmuth Leads into Heads-Up, but Not For Long

Greg Pappas was eliminated by Phil Hellmuth a few hands into the new level when both players paired an existing card on the seventh street, but Hellmuth (Qx 7x 6x 5x 4x) had a slightly better hand than Pappas (Qx 10x 8x 6x 2x) to give the thirteen time WSOP Champion a 1,060,000 -v- 515,000 chip advantage going into the heads-up against Ted Forrest.

However, Forrest – himself the winner of five WSOP bracelets – was not fazed by playing against Hellmuth, and took the chip lead a few hands into Level 24 (blinds 20,000/40,000 – ante 5,000) when his open cards took a narrow lead on fifth street and he completed an Eight-high hand after getting six streets of value from Hellmuth.

Ted Forrest started to pull away with the chip lead as an appalling selection of cards forced Phil Hellmuth to fold his hands, but buoyed on by a partisan support, Hellmuth clawed his way back into the game and again took the chip lead when Forrest kept pairing his open cards and giving the hands up.

Forrest then had the good fortune to river a Nine-high against Hellmuth´s made Ten-high to move ahead once more; and this time he remained with the chip advantage as another series of poor open cards hindered Hellmuth´s attempts to get back into the game.

Phil Hellmuth´s grasp on his fourteenth bracelet was getting looser, and eventually it was gone – Ted Forrest making a Six-low to relieve Hellmuth of 350,000 chips and reduce his stack to half of one big blind.

Hellmuth´s final chips went into the pot in the next hand – one which he looked like taking until Ted Forrest spiked a Nine on seventh street to give him a Nine-low winning hand against Hellmuth´s Ten-low.

Ted Forrest had won his sixth WSOP bracelet, and Phi Hellmuth was gracious in defeat – tweeting:

Congrats to my old friend Ted Forrest on winning #WSOPRazz tourn. If I had to lose to someone, I’m glad it was Teddy….2nd place for me