Gregory Kolo demolished the final table of 2014 WSOP Event #12, overcoming the seven opponents between him and the bracelet in little under three hours. 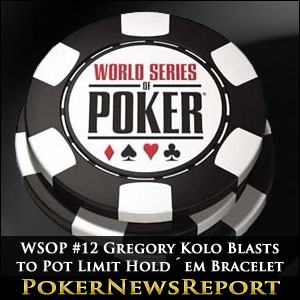 Gregory Kolo demolished the final table of 2014 WSOP Event #12, overcoming the seven opponents between him and the bracelet in little under three hours.

Gregory Kolo came into Day 3 of the Pot Limit Hold´em Event as chip leader after eliminating former November-Niner Phil Collins K♦ K♣ > Q♠ Q♣ in one of the last hands of Wednesday´s action, but he faced formidable opposition from the likes of Kazu Oshima who recently made it into the final day of the L.A. Poker Classic, and Tom McCormick, whose WSOP history stretches back to a third place finish in the Fixed Limit Event in 1992!

Oshima Straight into the Chip Lead

The tournament resumed in Level 21 with blinds of 8,000/16,000 (no ante in Pot Limit Hold´em) and almost immediately there was a new chip leader when Kazu Oshima took down a pot approaching 150,000 chips against Gregory Kolo A♠ K♣ > A♣ 10♠. Further down the leaderboard there was also plenty of action – Tom McCormick doubling up against Dean Bui Q♥ Q♣ > A♦ 3♠ and David Martirosyan crippling Ryan Schoonbaert A♦ K♦ > A♥ Q♥.

Ryan Schoonbaert was the first player to leave the final table of 2014 WSOP Event #12, when Q♦ 9♦ failed to improve past Kazu Oshima´s K♥ J♣, and Schoonbaert was quickly joined on the rail by Ahmed Amin – who paired his K♣ J♥ on the flop of J♣ A♣ 4♠, but could not find the cards to best David Martirosyan´s A♥ K♠.

Three more players fell quickly during an action-packed second level. Kazu Oshima rivered an Ace-high flush to eliminate Dan Goldman K♠ 2♠ > K♦ Q♣, and Oshima extended his chip lead by busting out Tom McCormick in fifth place J♠ 9♠ > 3♠ 3♦. His hat-trick of eliminations was completed when his A♥ 9♠ flopped two pairs against David Martirosyan (Q♥ 9♦), but it was Gregory Kolo who regained the chip lead as the game went three-handed.

Kolo had been applying pressure to all the other players with pot sized pre-flop raises throughout the opening two levels, and when he was met with resistance, just threw more chips into the pot. The only player to stand up to Kolo was Kazu Oshima, but he paid the expensive price of following Kolo all the way to the river once, and never tried it again.

The early hands of the heads-up climax of 2014 WSOP Event #12 were fairly even, but on hand six, Oshima moved all-in with Q♠ 9♠ on the board of 2♥ J♥ 3♠ / 10♦ / 4♠ and Kolo made the call – showing J♣ 3♠ for two flopped pairs. Oshima slammed his cards down in degust and walked off the stage, while Gregory Kolo was mobbed by his supporters in celebration of his victory.