Justin Bonomo lost his title of “the most successful poker player never to win a WSOP bracelet” when taking down the NL Hold´em 6-Max 2014 WSOP Event #11. 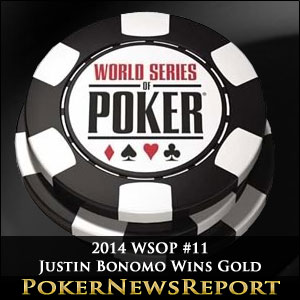 Justin Bonomo lost his title of “the most successful poker player never to win a WSOP bracelet” when taking down the NL Hold´em 6-Max 2014 WSOP Event #11.

After eleven events in the 2014 WSOP, there is a surprising early pacesetter in the race for WSOP Player of the Year – Justin Bonomo. Bonomo has never really sparkled at the World Series of Poker (“just” $1.13 million of his $7.5 million in live poker cashes have come in bracelet events), but last night he improved on his second place in last weekend´s 2-7 Triple Draw Event #5 to take down the $1,500 buy-in NL Hold´em 6-Max title.

Bonomo´s victory in the 2014 WSOP Event #11 will undoubtedly grab all the headlines, but the manner of his victory was also remarkable – keeping out of the way in a crazy 9-minute spell which saw the ten players who returned for Day 3 of the event reduced to a final table of six, and then overcoming a 3:1 chip deficit to defeat Mike Sowers in the heads-up climax of the event.

When play resumed in the Amazon Room of the Rio All Suites Hotel and Casino, the ten remaining players were distributed over two tables – Mike Sowers leading table 450 with 1,413,000 chips, while Justin Bonomo had the advantage on table 446 with 1,294,000 chips.

Within ten minutes of play starting, the field had been reduced to a final table of six, with the respective chip counts looking like this:

Sowers the Eliminator Leads into Heads-Up

Despite all six players being well stacked (blinds were 8,000/16,000 – ante 2,000) when the final table got underway, it took less than two hours for the event to reach its heads-up climax. Taylor Paur was the first player to depart when Daniel Strelitz (A♥ K♠) rivered the K♣ to best Paur´s pocket Queens and send him to the rail in sixth place, and Niel Mittelman was even more unfortunate to be bust in fifth place – getting all-in with Q♥ Q♠ on a board of 4♠ 7♥ 5♥ against Mike Sowers´ 9♣ 9♦, turning the A♥ for the flush draw and losing out to the 9♣ on the river – the only card Sowers could have won the hand with!

Just two orbits of the button later and Lance Harris (J♣ 10♦) was eliminated when both he and Sowers (A♣ Q♣) both missed the board; and Daniel Strelitz quickly knew his fate when calling Sowers´ A♦ A♥ shove with Q♠ Q♣, and seeing the flop of A♣ K♣ K♠ to give Sowers a Full House. Mike Sowers destruction of the final table was almost complete, and he looked a strong favourite to win the tournament – taking a 5,532,000 -v- 1,611,000 chip advantage into the heads-up against Justin Bonomo.

The early action in the conclusion to WSOP 2014 Event #11 saw little change in the relative chip stacks of the two players, but after 40 hands of heads-up play Justin Bonomo started to make some inroads into Mike Sowers´ dominating stack. A flopped pair of Nines enabled Bonomo to pick up a 770,000 chip pot, and that was quickly followed by victory in a 1.3 million chip pot with a flopped pair of Queens.

Justin Bonomo started applying the pressure and took down a series of substantial pots with large River bets to move into the chip lead. A massive hand in which Bonomo (A♦ 5♠) rivered a wheel against Mike Sowers (J♥ 2♥) flopped two pairs reduced Sowers to 25,000 chips; and although Sowers twice managed to double up, the writing was on the wall.

The final hand of the 2014 WSOP Event #11 saw Justin Bonomo (10♥ 3♥) place Mike Sowers (Q♥ 10♣) all-in after the flop of 4♥ 8♥ {7•}. Bonomo had flopped a Ten-high flush, but Sowers could have beaten his hand if another heart was to appear on the Turn or River. Unfortunately for Sowers, his luck abandoned him, and the board completed with the 9♠ and 8♦ to give Justin Bonomo his first ever victory in a WSOP bracelet event.