Poker professional Dan O’Brien Holds a more than 3-to-1 chip lead going into the heads-up final of WSOPE Event #3. 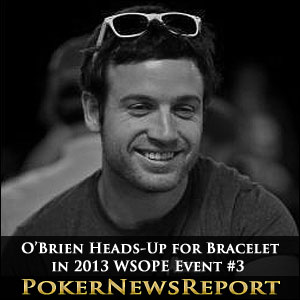 Poker professional Dan O’Brien Holds a more than 3-to-1 chip lead going into the heads-up final of WSOPE Event #3.

Event #3 – €5,300 Mixed Max No-Limit Hold’em of this year’s WSOPE is coming to a close. In tomorrow’s final heads-up match, recognized pro Dan O’Brien will gun for his first WSOP bracelet. Standing in his way will be Darko Stojanovic – a relatively unknown entity in the poker world. O’Brien will begin the match with a 1,594,000 to 507,000 chip advantage.

Day 3 began with 16 of the original 140 runners in contention for the title, a slew of top flight professionals among them. The remaining players were divided into four tables of four. November Nine finalist Marc McLaughlin was the first to go when his A♥J♣ was out-flopped by Joe Kuether’s A♦5♥.

Another November Niner, young pro Mark Newhouse, fell in 12th after getting it in with one pair against Jeremy Joseph’s Kings. Aggressive pro and WPT title winner James Dempsey fell in 11th after overplaying 9♠9♦. Shortly after, the legendary Phil Ivey would lose a flip with K♣Q♣ to finish 10th.

Ville Mattila fell in ninth, just moments before Kuether was eliminated in eighth. Kuether would end up being bounced by Dan O’Brien, who four-bet jammed with 10♠10♥. Kuether revealed 8♣8♠, and O’Brien’s hand would hold.

Jack Schwartz was eliminated in seventh when his K♦J♠ failed to overcome O’Brien’s A♠4♥. Although the door card was the J♦, O’Brien would spike an Ace on the flop and another on the river. Jeremy Joseph would fall soon after when his A♣J♦ crashed into Jason Mann’s pocket Kings. The board ran out dry, and the remaining five players would merge to one table. Play would continue until one more player was eliminated.

Little did the players know, five handed play would be a wearisome affair that would ultimately last three grueling hours. Shannon Shorr would eventually become the unfortunate heads-up bubble boy by first running Q♣Q♠ into O’Brien’s K♥K♠ and then jamming into O’Brien’s Kings yet again with K♣10♠. Both times the board provided little help, and Shorr was gone.

The heads-up portion of the Mixed Match proved to be the antithesis of five handed play. In fact, the first match, between second seed Darko Stojanovic and third seed Noah Schwartz lasted all of one hand. Holding a nearly 2:1 chip lead, Stojanovic jammed with A♣5♣ and Schwartz called with a superior holding – 9♦9♣. Stojanovic spiked an Ace on the flop and never looked back, winning the semifinal match in stunning fashion.

The other match between overwhelming chip leader O’Brien and Mann would only take slightly longer. Mann, who started the semifinals with only 7,000 less chips than Schwartz, was regulated to the number four seed and tasked with overcoming a massive 8:1 chip deficit. Mann would double-up early, but the circumstances ultimately proved too much for the lawyer turned poker player to handle. On the final hand of the day, Mann, holding Q♣2♣ would three-bet jam into O’Brien’s K♠K♣. It was the third time someone jammed into O’Brien’s cowboys that day. The board ran out low and Mann was bounced. He received €62,770 for his efforts.

Stojanovic and O’Brien will play for the title tomorrow at noon local time. First prize is worth €188,160 and a bracelet. Stay tuned for the results of this highly anticipated match.