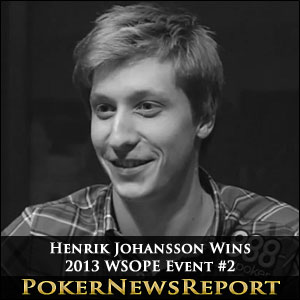 Event #2 – €1,100 No-Limit Hold’em Reentry concluded today with Sweden’s Henrik Johansson taking down the bracelet and the €129,700 that goes along with it. For Johansson it was the first major win and cash of his career. Prior to the win, his biggest score was an eighth place finish at the European Masters Main Event in 2009, good for a comparatively paltry €10,149.

So how does a relative unknown win a prestigious WSOPE bracelet? Simple – he plays well and runs better.

Day 3 started with nine of the original 659 runners returning for the final table. Of the remaining players, only two had established tournament poker resumes – Australia’s Daniel Laidlaw and the US’s Daniel Weinman. Action started with short stack Serge Ekert doubling up twice to get right back in the thick of things.

The first elimination would occur when Andrei Konopelko would three bet jam from the big blind with 7♣7♠. Johansson called with J♣J♦ and held up, sending Konopelko to the rail and adding over 100,000 chips to his stack. Jean-Philippe Tuffery would be bounced three hands later, failing to improve when his Q♦9♦ ran into Adriano Torre-Grossa’s A♥Q♣.

Jose Obadia was sent home in seventh place in relatively gross fashion. After jamming with A♦7♠, he was looked up by Johansson’s marginal A♠5♥. The flop was a dramatic 7♥4♠3♠, giving Obadia top-top and the Swede a double gut shot  and backdoor nut flush draw. The turn was a blank but the river was the 6♣, securing the massive suck-off for Johansson.

Daniel Laidlaw had a relatively quiet day, eventually taking a stand with Ace-high on a 6♦2♠9♥J♣K♥ board, only to be called by Torre-Grossa, who called a turn bet with a gut shot and two overs, only to spike a King on the river.

Ekert, who for all intents and purposes should have finished ninth, was finally eliminated in fifth place when his A♣9♥ could not overtake Yaniv Botbol’s A♥K♥. Botbol caught the nut-flush on the turn, and the hand was over. Ekert received €32,992 as a consolation prize.

Daniel Weinman, the last remaining established pro, was sent packing in fourth, when he three-bet shoved for his last 292k from the small blind. Johansson cold called from the big with A♣10♣, and was a nearly 3:1 favorite over Weinman’s A♥9♠.The flop ran out dry and Weinman was eliminated.

Botbol, after taking a brief chip lead, was eliminated in third when his pocket fours ran into Johansson’s K♠K♥. Things looked good for Botbol for a moment, as he spiked the 4♠ on the turn, but alas, Johansson would hit a set of his own on the river. And who said poker wasn’t a brutal game?

The heads-up affair between Johansson and Torre-Grossa would only last 22 hands, largely due to the tournament’s shallow blind structure. On the final hand, Torre-Grossa check-raised Johansson all-in holding {7c]6♠ on a board that read 9♦10♠7♥, good for bottom pair and a gutshot. But Johansson held top two, and was more than happy to get it in. The turn and the river both produced Aces and Johansson was declared the winner. Torre-Grossa received €80,250 for his second-place finish.

Congratulations to Henrik Johansson for winning his first bracelet. Stay tuned for more updates as the 2013 WSOPE enters its second week.