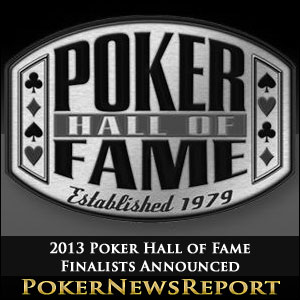 After a long and drawn out nomination process, this year’s 2013 Poker Hall of Fame finalists have been determined. A judging panel consisting of 19 living Hall of Fame members and 18 members of the media will gather later this month to determine the fate of the 10 finalists.

This year’s class consists of six returning nominees, one who was last nominated in 2011 and three other notable, and in some cases instantly recognizable, poker players.

Nominees will be judged in five categories: completion, level of play, consistency, standing the test of time, and for non-players, their contribution to the game of poker.  In order to be eligible a nominee must be at least 40 years of age – which is the sole reason why greats like Phil Ivey have not already been inducted.

Let’s take a brief look at each of this year’s nominees, along the way offering our own opinions on and who is worthy of joining poker’s most illustrious membership.

1)      Chris Bjorin – Would you believe that Bjorin is fifth on the all-time WSOP cash list (68)? He’s also cashed the Main Event seven times, most of them recently. He’s consistent, played at a high enough level and has been around forever. But he’s probably just not recognizable enough to make the HOF. We’ll place his chances at minimal.

2)      Humberto Brenes – This guy still plays poker? Brenes hasn’t had a six-figure score in six years, and while he tore up the poker scene before players knew what they were doing, he’s more recognizable for his crazy table antics than his ability. However, he did help popularize poker in Latin America and is fourth on the WSOP cash list with 72. Either way, Brenes is a longshot.

3)      David Chiu – Here’s a man that commands respect. He’s not the most recognizable figure, but Chiu is as consistent as they come. The 53-year-old from China has won five WSOP bracelets in three different formats. His most recent bracelet win came just this summer. Oh, let’s not forget that he’s won the WPT World Championship. David’s low profile may end up hurting his chances, but it would be a travesty for him to be left out of the HOF. As it stands, his chances of getting in are about 50/50.

4)      Thor Hansen – The mighty Norwegian helped spark the poker boom in Europe, and is probably one of the most accomplished cash game players among the nominees. That’s good, because his tournament record is significantly weaker than most. He probably won’t get in, but we’ll think of him at the next EPT.

5)      Jennifer Harman – Small, cute and innocent, don’t let Jennifer Harman’s outward appearance fool you. We like Jen’s chances, if only because she’s played in the biggest cash games in the world for the past bazillion years. She even took her turn against Andy Beal in the highest stakes limit game ever. To boot, Jen has 12 WSOP final tables and is the first woman ever to win more than one WSOP bracelet. Let her in guys.

6)      Mike Matusow – Mike “The Mouth” is more known as being a brooding time-bomb than he is for his poker ability. And that’s a shame, because the controversial Matusow still has game. Along with Phil Hellmuth, Matusow has proven that poker has not entirely become a young man’s game. Mike won his fourth bracelet this summer, has final tabled the WSOP Main Event twice (both post 2000) and won this year’s NBC National Heads-Up Poker Championship. He might be a nitty cash game player, but you have to respect Mike’s tournament game. He stands a fair chance of being inducted.

7)      Tom McEvoy – Another four-time bracelet winner, McEvoy’s career spans all the way back to the 1970s, when he left his job as an accountant to pursue the poker life in Las Vegas. Looks like it paid off. McEvoy won the 1983 Main Event, and has had consistent tournament results throughout the 1980s and 1990s. Problem is Tom has only recorded one six-figure win in the past 16 years. That’s a long time. It’s a good thing he’s done so much for the poker community, or else he wouldn’t stand a chance of being inducted.

8)      Carlos Mortensen – Carlos deserves to be in HOF, and is our #1 choice. No one has won more on the WPT ($6.5 million). No Spanish player has ever been as successful. And no player has had a better tournament ROI (at least we think). To top things off, Carlos – who was once down to just a few big blinds – came roaring back to finish 10th at this year’s WSOP Main Event. Carlos should be a shoe in to make the HOF. The only thing that might hold him back is his relatively young age (41).

9)      Scotty Nguyen – Scotty’s fun – less so when he’s drunk – but we just don’t hear about him as much as we used to. Still Scotty’s poker resume is far more impressive than most players realize. He’s made a staggering 19 WSOP final tables. He won the 1998 Main Event, won the 2008 $50k Players Championship and made the WPTs final six 8 times. And isn’t he the guy who says, All you can eat? No wait, that’s Men the Master. Odds are out on Scotty’s chances of induction; it really depends on how much the judging panel has had to drink.

10)   Huckleberry Seed – Quiet, composed and rational, former athlete Huckleberry “Huck” Seed is a four-time WSOP bracelet winner, including wins in three different formats and a Main Event title. He’s won the Heads-Up championship, has tons of six-figure scorers, and regularly made appearances on NBC’s Poker After Dark. Huck might not have the resume of some poker giants, but he is probably one of the deepest and most analytical thinkers in the game today. But sorry Huck, we don’t think this is your year.

And there you have it. Stay tuned for the results of this year’s judging.