The 2013 WSOP Main Event’s November Nine has officially been set, and it is JC Tran who leads the pack on the chip ladder. 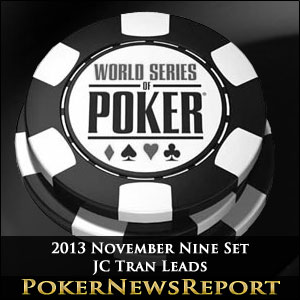 The 2013 WSOP Main Event’s November Nine has officially been set, and it is JC Tran who leads the pack on the chip ladder.

JC Tran finished the seventh day of play with 38 million chips to his name and is the only player to have a stack of over 30 million. Israeli Amir Lehavot finished the day second on the chip ladder, with a stack of 29.7 million, which was a little over three million more than Marc McLaughlin, who hasthe third largest stack with 26,525,000.

Frenchman Sylvain Loosli is sixth on the chip ladder with a total of 19.6 million, while Michiel Brummelhuis is seventh with 11,275,000 chips. Mark Newhouse and David Benefield will be the short stacks of the November Nine with 7.35 million chips and 6,375,000 chips respectively.

It was a hard fought day on the felt on Day 7 as the remaining 27 players battled hard to keep their spots in the Main Event. Play finished in the early hours of the morning as the final table of this year’s Main Event was finally set.

2001 WSOP Main Event champion Carlos Mortensen was the bubble in this year’s event after losing his final hand to Tran. Mortensen, who had A♣ 9♥, raised to 800,000 before the flop and was called by Tran, who had 8♣ 7♠.

Mortensen remained ahead after the 10♣ 6♣ 3♠ flop, but Tran got an inside straight draw, which he hit on the turn when the 9♣ was shown. That prompted Tran to go all in before being called by Mortensen, who ended up being eliminated after the 2♦ on the river kept Tran’s hand dominant.

The elimination marks the elimination of all previous WSOP Main Event winners from the tournament, with a number of winners having been eliminated in previous days.

Former chip leader Anton Morgenstern was eliminated after he lost a showdown against Fabian Ortiz in the mid stages of the day. It was a big fall of grace for the German, who had entered Day 7 with a commanding chip lead over the remaining 27 player field.

Ortiz raised to 400,000 before the flop only to be reraised all in by Morgenstern, who was down to his final 2.495 million. He was promptly called by Ortiz and Morgenstern showed a solid hand in A♦ J♠. Unfortunately for him, however, Ortiz showed A♠ A♥ and the German had an uphill battle on his hands.

The pocket rockets held on the 4♣ 3♦ 2♦ flop, as well as the 6♠ on the turn and the 9♥ on the river, which won Ortiz the hand and knocked Morgenstern out of the event in 20th place.

Ortiz was himself knocked out of the Main Event a few hours later after he lost his final hand of the event against JC Tran. With A♣ Q♥, Ortiz went all in after the river came on the K♠ 9♣ 7♠ 4♥ 6♠ board and, after a few minutes of deep thinking, was called by Tran, who showed 9♠ 8♦.

That gave Tran a pair of Nines, which won him the hand and eliminated Ortiz from the event in 17th place. The win put Tran up a 18.8 million chips, putting him in a good position to make it to the final table of the Main Event.

The November Nine’s chip leader is arguably the biggest name on the final table. Tran has won two WSOP Gold Bracelets before; one in 2008 and another back in 2009. Despite that, the Vietnamese American has never won a Main Event, but is in a good position to change that once November rolls around.

Lehavot is another player who has a WSOP Gold Bracelet to his name, having won the $10,000 Pot Limit Hold’em Championship event back in 2011. That will not count for much as all players on  the final table will be hungry for the top prize as well as the $8.3 million payout and the accolades that come with being a WSOP Main Event winner.

It will be a long three and half months before the rest of the Main Event will be played, but it will be worth the wait as it looks to be a competitive encounter between nine of the world’s best poker players.