Following a break of three and one-half months, the WSOP Main Event resumes action at the Rio All-Suite Hotel and Casino in Las Vegas on Monday, Oct. 29. 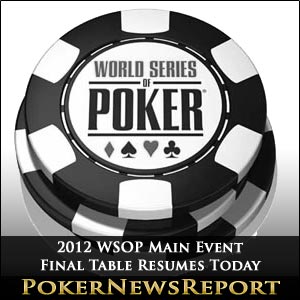 Following a break of three and one-half months, the 2012 WSOP Main Event resumes action at the Rio All-Suite Hotel and Casino in Las Vegas on Monday, Oct. 29.

Poker’s most coveted tournament was paused after Gaelle Baumann was eliminated in 10th place in mid-July. The final nine players have had ample time to bone up on their game and many have used the layoff wisely, receiving expert coaching from some of the top pros in the game. But its time once again to get back to live action with cards going in the air in the Penn & Teller Theater at 4:45 p.m. Pacific time.

The eight Americans and one Hungarian who make up this year’s final table will play Monday until three players remain. Action will stop at that point until Tuesday, Oct. 30, picking up at 5:45 p.m. and continuing until a winner emerges. For those unable to attend, all the action will be aired on a 15-minute delay on ESPN2 and streamed via webcasts at WSOP.com and ESPN3. Commentators Lon McEachern and Norman Chad will call the action, while poker’s all-time money winner, Antonio Esfandiari, will provide analysis. Similar to the format followed last year, hole cards will be revealed following each hand’s conclusion.

The current chip counts and seating assignments are as follows:

The “Octo-Nine” will divide more than $27 million in prize money, almost 44% of the over $62 million total prize pool obtained from the $10,000 buy-in of the 6,598 players who entered the tournament in July. All nine players have already received ninth place prize money of $754,798. The $20,454,658 remaining was placed in an interest-bearing money market account where it earned $10,185–slightly more than one buy-in. The interest accrued was added to the prize money for the first to eighth place finishers, which calls for the final table payouts to be as follows:

Of the nine remaining players, only two have captured WSOP bracelets in the past–Merson and Gee. Merson won his bling this summer in Event #57, a Six-Handed No-Limit Hold’em tourney with a $10,000 buy-in. A victory in the Main Event would assure Merson of winning the 2012 WSOP Player of the Year title. Should Merson fall short of first place in the Main Event, all-time WSOP bracelet winner Phil Hellmuth would add the Player of the Year championship to his plethora of accomplishments.

Sylvia is the chip leader and has played in 14 other WSOP events, cashing only once for $2,954. But his huge lead in chips has oddsmakers making him the favorite. Sylvia has history on his side in regards to a huge payday. The concept of halting play after reaching the final table has been in effect since 2008. Since that time, the final table chip leader upon resumption of play has finished at least in third place.

Koroknai–in second place–took down the World Poker Tour L.A. Poker Classic in 2010, receiving $1.7 million for his efforts. That’s the biggest cash among the Octo-Nine. Koroknai has the distinction of having eliminated the last two women standing–Norway’s Elisabeth Hille in 11th place and France’s Gaelle Baumann in 10th–which also made him the only non-American player remaining.

When action resumes Monday afternoon, the final table will commence in the midst of Level 34, posting blinds of 150,000/300,000, with an ante of 40,000. The short stacks, such as Ausmus at 9.8 million in chips and the 13.1 million of Balsiger, will hope to double up and get back in the match. Ausmus had a wonderful summer, cashing in nine WSOP events, and shouldn’t be counted out in the Main Event despite his short stack.