The WSOP Main Event this year seems to comprise of players that few people have heard of. Here is PokerNewsReport´s guide to those who made the final table. 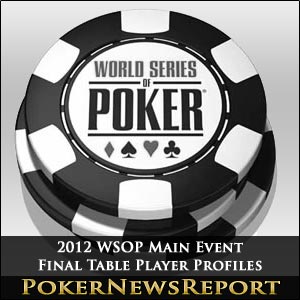 The WSOP Main Event this year seems to comprise of players that few people have heard of. Here is PokerNewsReport´s guide to those who made the final table

During Day 6 of the WSOP Main Event, Daniel Negreanu tweeted that of the remaining 42 players, he had only heard of five. Sadly for Negreanu´s “Famous Five” – Amnon Filipe (finished 39th), Jan Heitman (26th) Yuval Bronshtien (23rd) Paul Volpe (20th) and Danny Wong (14th) – none of them made the November 9 that, this year, will be played from October 28th to October 30th.

When the field was reduced to 18, Keith “The Camel” Hawkins also commented on the lack of “established” names remaining in the Main Event – tweeting that he had only heard of one (Greg Merson) and hadn´t heard of him until he won a bracelet about 10 days ago.

With much of the focus (at the time) on the two remaining women in the event – Elisabeth Hille and Gaelle Baumann – the achievements of those that will participate at the final table might have been overlooked. Consequently, PokerNewsReport has prepared a mini-guide to the 2012 November 9.

Jesse Sylvia is a 26-year-old professional poker player from West Tisbury, Massachusetts, who now resides in Las Vegas. His WSOP pedigree shows just one min-cash in a 2011 6-max donkament, with his best live result to date being second place in a 2008 Mega Stack Series in Las Vegas for $15,078.

Andras Koroknai – despite coming from Debrecen in Hungary – is the highest achiever among the remaining nine players. Victory in the WPT LA Poker Classic in 2010 provided the bulk of his live poker winnings to date, but Andras has previous WSOP experience – two minor championship cashes in 2010.

Greg Merson is a native of Maryland who joined the general exodus to Toronto following Black Friday (so practically a neighbour of Negreanu). With three WSOP cashes and a bracelet already under his belt this year, Greg is in a strong position to snatch the 2012 WSOP Player of the Year title from Phil Ivey.

Russell Thomas is a 24-year-old actuary – a business professional who deals with the financial impact of risk and uncertainty and should therefore know what he is doing at the tables! 3 WSOP cashes combine to make his total career live poker earnings of $126,796, with his best finish being fifth in the 2010 6-Max event.

Steven Gee is the second WSOP bracelet holder in the field, having taken down a 3,000 player event in 2010. Originally from China, the 56-year-old poker professional now resides in Sacramento, California and has three other WSOP cashes in his poker CV and a Bachelor of Science in Accounting.

Michael Esposito hails from Seaford in New York and despite not having much of a WSOP pedigree (3 min cashes prior to the Main Event) has a long list of poker achievements much closer to home in Atlantic City. Don´t expect Michael to be fazed by the final table experience!

Robert Salaburu is the dark horse of the field – he doesn´t even feature on the Hendon Mob´s poker tournament database. It is known that the 27-year-old poker pro from San Antonio, Texas, has enjoyed a little success on the NAPT – including victory at Mohegan Sun which netted him the $17,000 shown above.

Negreanu et al could be forgiven for not previously knowing the name Jacob Balsiger. Being only 21 years of age, this is Jacob´s first WSOP appearance. The Arizona State University student is not doing too badly at the moment, having cashed in Event #2 and a side event at the Rio already this year.

Jeremy Ausmus is a 32-year-old graduate of Colorado State University who now plays poker professionally. He has already amassed 8 cashes in this year´s WSOP series and has a lifetime total of 13. However, he has only once before reached the final table of a WSOP event – the 7 Card Stud in 2011.

Each of the remaining nine players is guaranteed a minimum cash of $754,798, with the winner of the Main Event receiving a life-changing $8,527,982 – more than double the lifetime tournament earnings of all nine players combined! When play resumes at the Rio All-Suites Hotel and Casino on October 28th, the blinds will be 100,000-200,000 with a 30,000 ante.