A poker tournament with the largest ever buy-in of $1 million has been scheduled for July, 2012, to be held in conjunction with the 2012 World Series of Poker (WSOP). 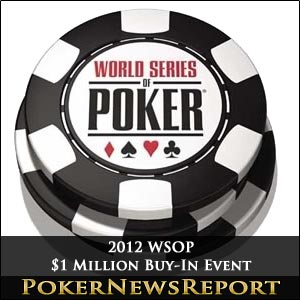 A poker tournament with the largest ever buy-in of $1 million has been scheduled for July, 2012, to be held in conjunction with the 2012 World Series of Poker (WSOP).

Caesars Interactive Entertainment has announced that the event will benefit the ONE DROP organization, which aims to fight poverty throughout the world by raising awareness to the need to support access to clean, safe water for everybody, but especially in impoverished countries. Twenty-two players have already signed on to play in the event, known as the BIG ONE for ONE DROP, which will will run from July 1-3, 2012, in Las Vegas at the Rio All-Suite Hotel and Casino.

The $1 million no-limit hold’em tourney is the brainchild of Cirque du Soleil founder and ONE DROP chairman Guy Laliberté, who has pledged responsibility of $100 million in donations to ONE DROP over a 25-year span. Since founding the organization in 2007 in Montreal, Canada, $41 million has been raised in contributions and pledges. Of the tourney’s $1 million buy-in, $111,111, or 11.1%, will go to the cause.

“We are proud to align the planet’s premiere poker event with the foundation created by one of our generation’s most creative entrepreneurs, Guy Laliberté, to help make the world a healthier place,” said Gary Loveman, president, chairman and CEO of Caesars Entertainment.

Some of the players who have already committed to the event include Johnny Chan, Daniel Negreanu, Bertrand “ElkY” Grospellier, Jonathon Duhamel, Tom Dwan, Gus Hansen and Patrik Antonius. Other players are expected to sign on in the near future with a cap of 48 registrants scheduled.

“I am absolutely thrilled to participate in the biggest poker event ever organized,” said Jonathon Duhamel, the 2010 WSOP Main Event champion. “One million dollars is a lot of money but my participation comes naturally, being a spokesperson for ONE DROP and because of my attachment to such a great cause. Life starts with water and because of its uneven distribution, a person dies every 20 seconds. As for me, I personally commit to give five percent of my winnings from this tournament to ONE DROP.”

Players will start the event with a stack of three million in chips, which follows the WSOP standard of three times the buy-in. Each level played will total 60 minutes. The poker tournament is structured to pay 20 percent of the total players in the field, an amount double the usual poker tourney payout structure. Should the BIG ONE for ONE DROP reach the maximum of 48 players entered, more than $40 million would be in the prize pool to be payed out to the top nine or 10 finishers. The winner will receive a special platinum WSOP bracelet.

“A million dollar buy-in seems crazy, and well, it is, but when you factor in a great cause like ONE DROP getting a percentage of the prize pool, all of a sudden it seems like a fantastic idea, and a great way to raise money for charity,” said Canadian pro Daniel Negreanu. “Count me in.”

For any players interested in participating, a deposit of $50,000 is needed to secure a seat in the event, with the remainder of the buy-in fee due two weeks prior to the starting date of July 1, 2012. Anyone is invited to play in the poker tournament, as long as you can come up with the $1 million buy-in and are 21 years of age.

“Since its creation, ONE DROP has reached out to millions of people to support access to water and raise each and every one’s awareness of water-related issues,” said Laliberté, who will also be playing in the event. “Every gesture is important. The poker community is very generous and it is not only about the one million dollar buy-in event, there are other ways that poker players can make a difference. We are looking forward to the BIG ONE for ONE DROP as a creative and innovative solution to fund ONE DROP projects that help fight poverty by supporting access to water worldwide.“