Online poker giant PokerStars have announced the details of their first four events of next year’s UK and Ireland Poker Tour (UKIPT). 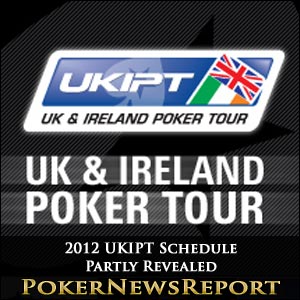 Online poker giant PokerStars have announced the details of their first four events of next year’s UK and Ireland Poker Tour (UKIPT).

The opening event will take place in the west of Ireland with the €100,000 guaranteed tournament at the Radisson Hotel in Galway from February 16-20, with the other three confirmed stops taking in Nottingham (April 12-16), Dublin (May 17-21) and Newcastle (September 6-10).

After stopping off in Galway for five days, the world-famous Dusk Till Dawn venue in Nottingham will make use of its 45 tables in the main card room, before moving back across the Irish Sea to Dublin. The fourth announced stop on the tour will see players line up at Newcastle’s Aspers Casino.

The season three buy-ins show an increase on this year’s tour, with all going from either £500 or €500 to £700 and €700. Side events will be announced closer to the scheduled start dates of each event.

There will, of course, be more dates added to the UKIPT calendar over the coming months, while satellite qualifiers for the Galway leg have already started at PokerStars.