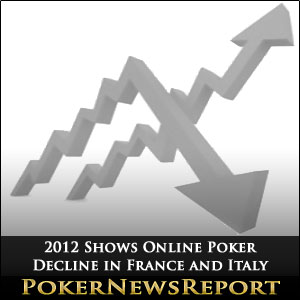 The steep decline in online poker revenue in both Italy and France in 2012 seems to be linked to the lack of shared poker player pools. Italy’s AAMS has suggested it is time to remedy this.

Jean-Francois Vilotte, the ARJEL president noted that it is concerning that the attraction of poker seems to be lessening. It seems that in France, because of the taxation system for online poker, the sites have a higher rake for cash games. As a result of this, more players have moved over to playing online poker tournaments, rather than the cash games.

According to the AAMS, in Italy, however, since the cash games have been introduced, there has been more of a decline in online poker tournament revenue.

While this lack of cooperation has become a clear problem in Europe, there are those who feel that the United States could learn a lesson from this. The US was on track to legalize online poker on a federal level, however, it now seems that the US is not going in this direction, but rather will allow individual states to legalize online poker. This will mean that there is no player sharing, which could adversely affect the potential online poker income in some states.