The world-famous Venetian Resort Hotel Casino have announced their schedule for the upcoming 2012 Deep Stack Extravaganza I. 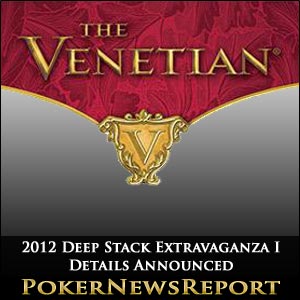 The world-famous Venetian Resort Hotel Casino have announced their schedule for the upcoming 2012 Deep Stack Extravaganza I.

The 44-tournament series in Las Vegas begins on January 26 and ends with a three-day $2,500 buy-in main event that will run from February 19-21.

The Venetian has included several new tournaments and buy-ins on the calendar, but the most noticeable change from previous years will be the location of the first Deep Stack Extravaganza of the new year.

The initial DSE of 2012 has been moved to the Palazzo Hotel and Casino as The Venetian’s casino is being refurbished.

Washington’s Scott Clements last week picked up the $145,775 top prize for his triumph at the 2011 Deep Stack Extravaganza IV main event, seeing off 264 opponents to snare the cash.

Saturday, February 4, sees a $340 buy-in women’s event – sponsored by the Ladies International Poker Series Tour (LIPS) – midway through the day, while there will also be an earlier $550 No-Limit Hold’em tournament and the later $175 and $120 No-Limit Hold’em poker events, which run almost every day of the series.

Another highlight will surely arrive on Sunday, February 12, when the day begins with a $1,070 buy-in No-Limit Hold’em tournament, to be followed by a $340 H.O.R.S.E. poker event.

Then comes the concluding main event on Sunday, February 19, when numerous big-name pros will be aiming to emulate Clements by taking home the biggest prize of all.

If you’re curious as to what is on offer, the full 2012 Deep Stack Extravaganza I schedule is located at The Venetian’s website.